Turns out you can't file lawsuit on behalf of 'whoever' 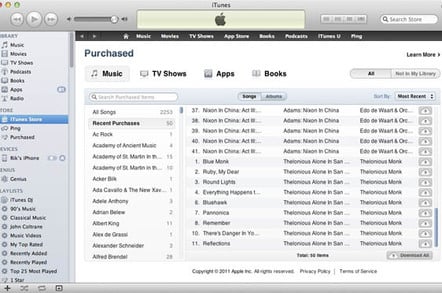 The status of the class-action lawsuit against Apple over its iTunes store is in doubt, after it appeared that the plaintiffs were not actually eligible to sue.

On Friday, Apple filed a motion [PDF] to dismiss the suit on the grounds that the plaintiffs listed didn't actually own an iPod during the period for which they are suing the company for restricting songs on the devices.

The suit alleges Apple violated consumer protection laws between 2006 and 2009 by unfairly restricting iPod owners to playing music purchased through or ripped from CD by iTunes.

Apple has thus far argued that it was not violating antitrust laws but rather making reasonable efforts to protect the iPod and iTunes lines from hacking and tampering with the anti-piracy protections it was asked by labels to provide.

Now, however, it seems Cupertino is moving to have the case tossed out on different grounds related to the plaintiffs themselves.

While a class-action lawsuit allows attorneys to sue on behalf of a large group of customers and divvy up the penalties at a later date, to actually bring the case to court requires one or more people who were actually subject to the wrongdoing.

According to Apple, neither of the two people listed as plaintiffs in the Northern California District Court case owned an iPod during the aforementioned years. The company argues that both plaintiffs – Melanie Wilson and Marianna Rosen – purchased their Zune-killers outside of the period in which their attorneys are claiming Apple violated the antitrust laws.

Because none of the people filing the suit are actually subject to the damages described in the filing, Apple believes that the case should be binned. Wilson has already withdrawn from the legal fight.

“I am concerned that I don’t have a plaintiff. That’s a problem,” Judge Yvonne Gonzalez Rogers said in the Oakland court on Thursday. Apple first brought the issue to her attention in a letter on Wednesday evening.

If Apple's motion were to be granted, the class action would end – but Apple would not be out of the woods as others who did buy an iPod during the Sept 2006 to March 2009 period would be able to file other claims against Apple.

It would, however, end a case against the company which has been going on in various forms for nearly a decade. ®