US govt tells ICANN: No accountability, no keys to the internet 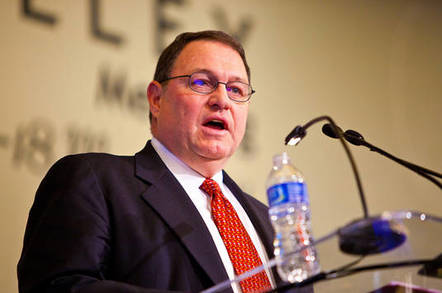 America's assistant commerce secretary Larry Strickling has told domain-name overlord ICANN that without improvements to its accountability the US government will not hand over the crucial IANA contract.

IANA is the Internet Assigned Numbers Authority, a department of ICANN that oversees the DNS system keeping the internet glued together, the allocation of IP addresses, and other crucial behind-the-scenes bits of online life.

ICANN has a contract with the US Department of Commerce's NTIA body to run IANA, and that contract is coming to an end.

That contract allows the US government to keep ICANN in check and out of the wrong hands. Now ICANN is under increasing pressure to prove it's up to the job of keeping IANA, and by extension the whole internet, running smoothly all by itself once the US contract expires.

"The two work streams on the IANA transition and enhanced accountability are directly linked and NTIA has repeatedly said that both issues must be addressed before any transition takes place," Strickling told the Telecommunications Policy & Regulation Institute on Thursday, noting that the US government was prepared to use its option to extend the contract for up to four years.

Strickling also referenced "stress tests" that have been developed by the business community as a way of checking ICANN's suitability for a greater degree of autonomy. "NTIA believes that this accountability process needs to include the stress testing of solutions to safeguard against future contingencies such as attempts to influence or takeover ICANN functions that are not currently possible with the IANA functions contract in place," he noted.

Those stress tests - 12 in total - include scenarios where ICANN becomes insolvent, moves beyond its technical remit, attempts to make changes to the domain name system despite technical concerns, becomes captured and subverted by governments, and so on.

The speech should hopefully draw a line under efforts by ICANN to escape making changes to its structure or bylaws before it operates IANA on a more permanent basis.

ICANN staff have argued that it may not be possible to introduce accountability mechanisms in time for the planned transition timeline of October next year. The non-profit has stressed that it is critical the deadline be met due to changes in US domestic politics – specifically, the presidential election in 2016.

The issue about tying accountability improvements with transition of the IANA contract has been repeatedly fought over in the past six months – with ICANN's staff downplaying the need to tie the two, and the internet community pushing back.

In June, the organization's main policy body, the GNSO, put on public record that it wanted there to be an independent review body of the ICANN board.

“We need an independent accountability structure that holds the ICANN Board, staff and various stakeholder groups accountable under ICANN's governing documents, serves as an ultimate review of board/staff decisions, and through the creation of precedent, creates prospective guidance for the board, the staff, and the entire community,” it stated in part.

ICANN's response was to create a process whereby its staff and board decided not only the topics and scope of an accountability review but also whether it would accept any of the final recommendations.

That approach led to every one of ICANN's supporting organizations and advisory committees signing a second letter [PDF] noting that "substantial questions and concerns remain unanswered, including around the process to date and the plan as constructed."

Following lengthy negotiations, it was finally agreed at ICANN's recent meeting in Los Angeles that the internet community would have free rein to decide what accountability measures it would consider. However, the ICANN board remains in the final position of deciding whether to accept them or not.

The working group in charge of deciding on new accountability mechanisms has only just started its work, but the biggest topic is already well-known: whether ICANN can be forced to change its bylaws to allow an independent body to review its decisions and, critically, oblige the Board to act on their findings.

As we argued recently, the future health of the internet will come down to that one simple question, and so far both ICANN's CEO and chairman are opposed to it.

ICANN's legal department has even developed a memo claiming that such a move would not be legal under California law – that memo has been dismantled due to it's unique interpretation of California's corporate law.

Assistant secretary Strickling's speech yesterday comes out firmly in favor of the internet's multi-stakeholder model of decision-making, and makes it clear that if ICANN wants IANA permanently, it is going to have to abide by the accountability mechanisms that they decide upon. ®

Next page: Read the "stress tests" for IANA transition and ICANN accountability obtained by The Register
Page:
Tips and corrections
16 Comments