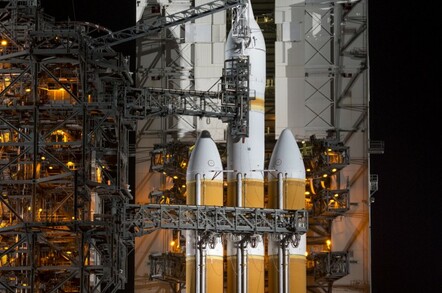 NASA’s Orion is fuelling up once again for its second day of attempted launches for its first ever test flight.

The space shuttle successor was due to blast off yesterday, Thursday, but the take off was scrubbed after a number of attempts over the two-and-a-half-hour launch window were nixed.

A boat in the red zone caused the first holdup, followed by high ground winds on a few occasions, and then a fuel valve that refused to close properly did for the last try.

The space agency has decided to press ahead with Friday's attempts despite the fact that Air Force meteorologists have lowered their expectations for acceptable conditions for a 'go' during the window to 40 per cent. The weather-watchers are concerned about a weather system that could bring more high winds along with rain, thus scuppering the launch.

The conditions are currently red because of cumulus clouds and precipitation over the launch site, but weather officer Kathy Winters said that both of these issues are expected to clear up in the next hour.

The ground crew are clearly keeping the faith and have proceeded with loading up the liquid hydrogen and oxygen the Delta IV Heavy rocket will need to lift Orion on its four-and-a-half hour journey.

The quick jaunt into space will take in an elliptical orbit of the Earth that will reach as high as 3,600 miles, pushing Orion through the lower Van Allen radiation belt, and then dropping it back at around 20,000 miles an hour through the atmosphere.

The trip should test Orion’s avionics, its eight-parachute landing deployment system, its huge heat shield and how well the craft stands up to radiation, all key issues that NASA hopes will eventually carry astronauts to Mars.

This test journey will be unmanned, but the plan is for the reusable craft to be capable of carrying folks on long space exploration trips. ®