Docker: Here, take the wheel – now YOU can run your own containers 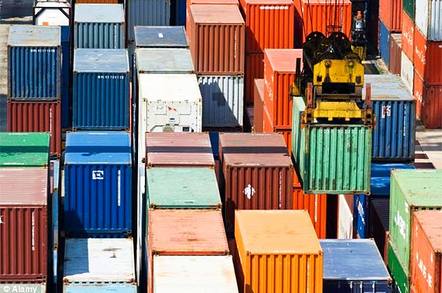 DockerCon EU Docker is all the rage among hip startups and early adopters, but Docker the company would like to get its tech into enterprises, too – which is why it's working on adapting its hosted Docker Hub service into a product specifically targeting large business customers.

The forthcoming offering, unsurprisingly named Docker Hub Enterprise (DHE), will be an on-premises version of Docker Hub designed to appeal to security-conscious businesses that are unwilling to trust an outside service to store their application containers.

The software, which the company announced during its DockerCon EU conference this week in Amsterdam, aims to allow enterprise customers to easily share, maintain, and collaborate on Docker containers behind their own firewalls or on private clouds, where previously they would have had to put together a complex collection of open source software to do so.

The idea is that customers will be able to compose multi-container applications using a combination of services from their own private repositories, Docker Official repositories, and containers from the public Docker Hub, which is currently home to more than 60,000 images.

The initial version of DHE will include an easy installer and a GUI configuration utility, but future iterations will expand its capabilities to include more DevOps-oriented features.

"Our vision for DHE is that it will evolve from the place to share and collaborate on distributed applications to a strategic control point for both developers and sysadmins to manage all aspects of the application development lifecycle – from build through production – on any infrastructure they choose," Docker CEO Ben Golub said in a blog post announcing the new offering.

The real trick, though, will be convincing enterprises to use the tech. Docker isn't the only company offering software for hosting on-premises container repositories.

To that end, Docker has enlisted Amazon Web Services (AWS), IBM, and Microsoft for help, each of which has committed to help pitch DHE to its customers.

IBM was reportedly the first company to sign on to sell Docker-based solutions including DHE, and it plans to offer the software both as on on-premise solution and a cloud offering. AWS and Microsoft, meanwhile, will offer prebuilt DHE images to allow customers to quickly get the software up and running on their respective clouds.

The catch, however, is that although Docker announced DHE at its Amsterdam conference, customers may not be able to get their hands on it until the next DockerCon US or later.

Docker does have some beta customers – names mentioned at DockerCon EU included Agco, Disney, ESPN, GE, Mailgun, MemSQL, Oculus, and Weebly – but the software won't be offered to the general public until an "early availability" version beginning in February 2015. There will be a waitlist, and Docker has not committed to a date that it will reach general availability.

Pricing for DHE will also be announced in February. Cross your fingers, if you're the betting kind. ®