Turns out the whole thing was pointless anyway 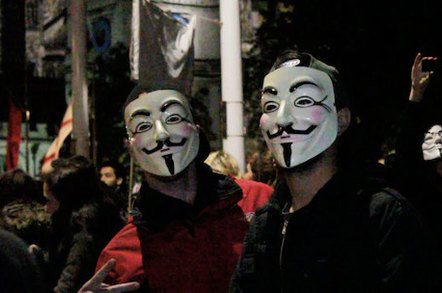 Municipal websites in Fort Lauderdale, Florida suffered a distributed denial of service attack on Monday after Anonymous promised to disrupt the city's activities following the passing of local laws outlawing the feeding of homeless people.

The attack occurred on Monday afternoon and led to massive congestion of the websites of the city and its police force, as well as the email system used by local government. The city authorities shut them down as a precautionary measure but the attack stopped by 6:30pm local time.

The previous day a group claiming to be affiliated with Anonymous threatened action against the Fort Lauderdale authorities in a video uploaded to YouTube.

The group said action would be taken because the city had enacted new laws to make life difficult for transients in the city by banning panhandling, sleeping in public places, and feeding the homeless.

The latter law brought a welter of bad publicity after city police twice charged Arnold Abbott, a 90-year-old local resident and war veteran, with breaking the law by organizing a buffet lunch to feed the homeless in a city park – as he had for the last 23 years with his group Love Thy Neighbor.

Mr. Abbott was lucky. Three members of the activist group Food not Bombs were arrested and led away in handcuffs after attempting similar al fresco lunches for the city's less fortunate in the self-styled 'Venice of America'.

But, as it turns out, Anonymous' attack (if it was them) has turned out to be largely pointless. On Tuesday a local judge suspended the law banning the feeding of homeless people in the city, saying that the city fathers needed to sit down with Mr. Abbott and his group to try and find a compromise. ®