Fruity firm's co-founder testifies from BEYOND the GRAVE 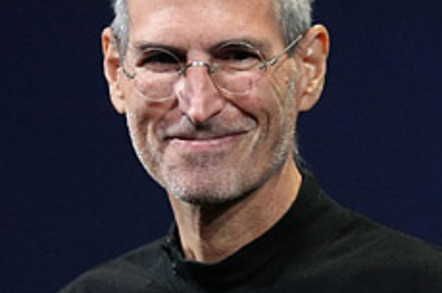 Early iPod fanbois and gurls are suing the fruity firm for unfairly blocking competition in digital music by forcing users to buy solely from iTunes.

In opening statements, the iPod users’ legal beak Bonny Sweeney introduced emails between top Apple execs, including Jobs, that discussed a challenge in online music from Real Networks, as Re/code, Bloomberg and others reported.

“There was a concern by Apple that this would eat into their market share,” she asserted.

Eventually, Cupertino introduced a software update to the iPod that stopped RealPlayer music from being downloaded. The argument is that this was unfairly anticompetitive because once a person owned an iPod, they were pretty much locked into the Apple “ecosystem”, even if they wanted to buy a competing device later.

In the emails, the Applers discuss how the firm’s 70 per cent market share in 2004 was slipping. Jobs suggested that the company should release a press statement accusing Real Networks of “hacking” the iPod.

“How’s this?” Jobs wrote. “‘We are stunned that Real is adopting the tactics and ethics of a hacker and breaking into the iPod.'”

“I like likening them to hackers,” Apple marketing chief Philip Schiller responded.

Apple’s attorney William Isaacson said that the company had every right to improve iTunes to protect iPods from security threats and any other damage Real Networks software might cause.

“It posed a danger to the consumer experience and to the quality of the product,” he claimed.

The fruity firm argues that it doesn’t have monopoly power in the digital music market and it has no legal duty to make its products compatible with competitors’ offerings.

The lawsuit was originally filed in 2005 and evidence at the trial includes a video deposition given by Jobs before his death in 2011.

According to the transcript, Jobs was his typical acerbic self when discussing the case, quipping, “Do they still exist?”, when asked about Real Networks.

He said in the deposition that he couldn’t recall many of the details of how he viewed Real Networks in 2004, but denied that his statements from the time sounded angry.

“[T]hey don’t sound too angry to me when I read them… Usually, a vehement — I don’t know about the word ‘vehement,’ but a strong response from Apple would be a lawsuit,” he said.