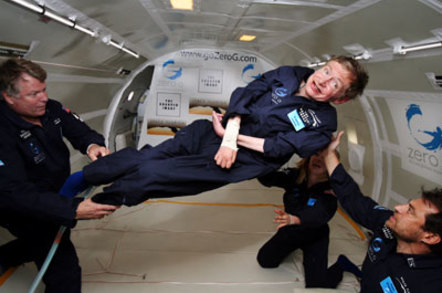 The refit occurred following a rapid deterioration in Hawking's word-per-minute rate, which dropped from a 20wpm rate 10 years ago to just under 1wpm when he approached Intel in 2011.

Hawking's speech rate has now doubled to around two words per minute, his ability to access functions on his system has also increased tenfold. Tasks such as opening files previously took up to three minutes.

Speaking at a press event in London, Hawking said that under the old system he was beginning to find it difficult to communicate and continue to give lectures and write books. "This is life-changing for me and I hope it will serve me for another 20 years," he said.

Hawking has amyotrophic lateral sclerosis (ALS), a motor neuron disease that progressively worsens over time. He is almost entirely paralysed.

The project focused on improving the user interface of the technology, which Hawking accesses via a cheek sensor detected by an infrared switch mounted to his glasses. Information is sent to his speech synthesiser, which he uses to communicate through his Microsoft Windows Lenovo laptop.

Intel integrated technology from British predictive text company SwiftKey, which contacted the chip giant after reading about its plans to develop the new system. The software enables Hawking to predict his characters and words so that he only has to type 20 per cent of the time.

Intel has been working with Hawking over the last 20 years, but this is the first time his communications system has been replaced. The company had previously made attempts to provide Hawking with a new speech system, but he rejected the changes.

In January Intel intends to make most of the software underpinning the project open source. The company developed the technology for free but declined to comment on the investment. ®

Hawking: RISE of the MACHINES could DESTROY HUMANITY

‘Elders of the Internet’ apologise for social media, recommend Trump filters to fix it

Feature Only fools rush into mobile payments and cryptocurrencies

Yuri Milner teams up with Zuck, Brin and Levinson

IPExpo Another set of terrifyingly Orwellian use cases