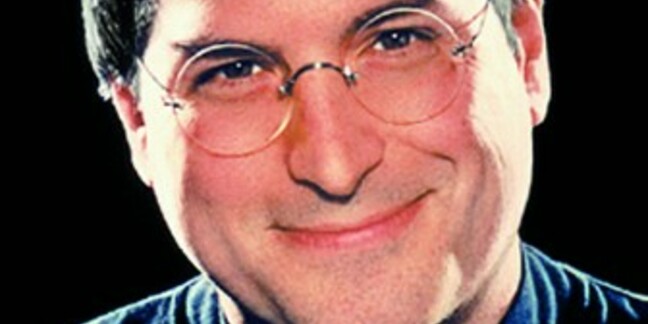 Steve Jobs will descend from the Genius Bar in the sky to appear as a witness in an antitrust case brought against Apple.

The iPhone giant's late cofounder will star in a video deposition in a class-action case relating to the iTunes store.

Proceedings will hinge around the fact early iPods only allowed fanbois and gurlz to play MP3s and other tracks bought from the iStore or ripped from their own CD collection.

It is alleged that this amounts to anti-competitive behaviour - a charge Apple intends to fight.

Steve Jobs' will feature in pre-recorded video footage explaining his actions. His letters are also likely to feature heavily in the case.

“We will present evidence that Apple took action to block its competitors and in the process harmed competition and harmed consumers,” said Bonny Sweeney, lawyer for the plaintiff.

Despite his celebrated genius, Jobs was known as, well, a bit of a tosser.

The Apple boss' emails often show him bullying smaller companies, or promising others untold financial benefits as long as long as they did what the fruity firm wanted them to do.

In 2003, Jobs was concerned about MusicMatch, a rival music service.

“We need to make sure that when Music Match launches their download music store they cannot use iPod,” he wrote. “Is this going to be an issue?”

Many more emails are expected to be unveiled during the trial.

Jobs was a “genius in terms of his vision for the future,” Michael Carrier, a Rutgers School of Law professor, told the New York Times.

“But it went along with a really healthy ego and perhaps the lack of an antitrust filter — thinking about how these words would appear years later tossed up on the screen in front of a jury,” he continued.

The firm faces potential damages of up to $350m if it loses the trial.

The case starts tomorrow. Keep an eye on El Reg for full coverage. In the spirit of competition, we won't stop you reading the rivals.