Men, Women and Children: Shows how crap the internet is via the medium of crap film

They should have cut out the bit on Earth 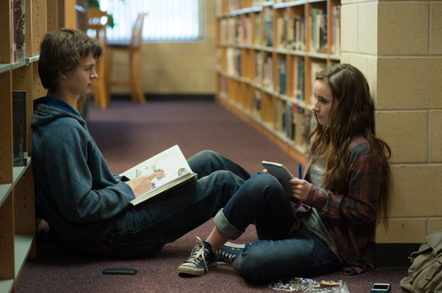 Film Review The internet has fundamentally changed the way we interact with one another - but at the same time it, like, hasn't. That seems to be the message behind the cringey and contrived Men, Women and Children.

Starring Adam Sandler, Jennifer Garner, Dean Norris, Judy Greer and Rosemarie DeWitt among others, this film is the latest "comedy-drama" from Jason Reitman.

While Reitman's oeuvre - Juno, Up in the Air, Thank You for Smoking - might not be to everyone's taste, compared to his earlier efforts it's surprising just how unfunny this heavy-handed attempt to define everday "digital native" life is.

The movie opens with the the Voyager I space probe on its journey beyond the solar system, set to the overtones of music chosen by the American astronomer Carl Sagan.

We then zoom in to Earth and spend the next 119 minutes following the trials and tribulations of a group of extremely annoying teenagers and their parents. All are struggling to keep their demons at bay with their worst indulgences just a wipe swipe away: a digital cautionary tale of being careful what you wish for.

But no one should ever have to witness Adam Sandler, who plays bored and frustrated husband Don Truby, mouth his sexual preferences while choosing an online escort - employing the same studied decision-making skills most of use to order pizza.

Elsewhere, there's the anorexic girl who goes online to get instant starvation tips; an over-controlling helicopter mum, played by Jennifer Garner, who conducts a one-woman NSA Prism programme to "protect" her daughter; a loner teen who disappears into online gaming; and a deeply naive mother who thinks it's OK to post pictures of her daughter online for payment. The list of depressing characters goes on.

And yet, relationships are formed and broken without the use of an internet connection and everyone struggles with the age old questions of self-identity and meaning. 'Twas ever thus.

Mercifully, we're reminded of the "sound and fury" of it all when the camera pans back to the Voyager and interstellar space at the end. If only Reitman had cut out the Earth bit, this would have been a good film. ®

Voyager 1 fires thrusters last used in 1980 – and they worked!

SpaceX touches down in California as Voyager 2 spies interstellar space

Musk's mighty missile no match for the plucky probe that could

Voyager 1 passes another milestone: It's now 138AU from home

Tape drive due to shut down in 2018 as 1.4 kbps link becomes too skinny