Megaupload overlord Kim Dotcom: The US has radicalised me!

Now my lawyers have bailed 'cos I'm 'officially' broke 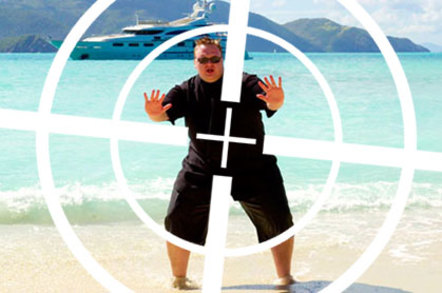 Megaupload founder, wannabe politician and wanted man Kim Dotcom has spent all of his money trying to avoid extradition to the US to face online piracy charges.

The internet entrepreneur told the unBound Digital conference in London yesterday that fighting the law and attempting to launch his political career had wiped out all of the millions he earned when Megaupload was at the height of its filesharing power.

“My legal team has recently resigned because I ran out of money after spending $10 million to try and defend myself. They [The US government] have certainly managed to drain my resources… and without lawyers I’m defenceless so they use that opportunity to try to get my bail revoked,” he said.

Dotcom is due in court in New Zealand tomorrow, when he will facing a hearing for allegedly breaching his bail conditions ahead of his extradition hearing, which won’t happen until the middle of next year. If it goes against him, he will be remanded in prison for the interim.

The German national said that at its peak, Megaupload and its sister sites were seeing traffic of over 50 million users a day, but even though US users only counted for around seven per cent of its audience, the American government decided to indict its owners and “destroy the sites completely”.

He added that the US’s actions had “radicalised” him, saying his flamboyant lifestyle and his German nationality had led to him being targeted by American authorities.

“Hollywood has a thing about German villains,” he said.

He also laid the blame for a lot of the world’s problems firmly on America’s doorstep.

“I'm probably influenced by what's happened to me, so don't take my word for it… but the US is causing all these issues around the world,” he claimed.

“They went to Iraq to try to bring peace, now we have ISIS raging a terror state. Everything they touch turns into disaster. It's a trend right now. Look at what is happening with our rights. The US government is spying on every human being on the planet and breaching every human being's right to privacy. They are in breach of 50 per cent of the international human rights charter."

Dotcom has since launched Mega, another filesharing site, but he doesn’t hold any of its shares, having transferred them to his wife and into a trust for his children.

You can see the full interview above, courtesy of unBound Digital’s organisers Acre White. ®