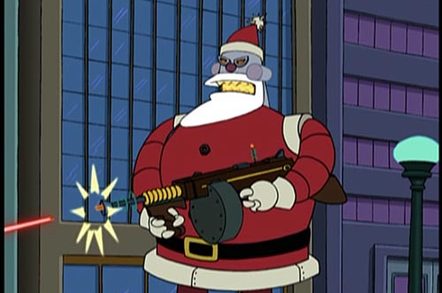 Google's elves have been busy working on a toy for all the girls and boys who run Mac OS and worry about getting a virus.

“Santa” is billed as “a binary whitelisting/blacklisting system for Mac OS X”, can be found on GitHub and “keeps track of binaries that are naughty and nice.”

Nice binaries get to run. Naughty binaries get a sack of coal and a mention on the coal-dark blacklist of code that's not allowed to run on a Mac.

The app “consists of a kernel extension that monitors for executions, a userland daemon that makes execution decisions based on the contents of a SQLite database, a GUI agent that notifies the user in case of a block decision and a command-line utility for managing the system and synchronizing the database with a server.”

The elves on Google's Macintosh Operations Team are being a bit mischievous with this one, as it is not an official Google project. Nor is it a version 1.0: the coders behind the project say they're “writing more tests, fixing bugs, working on TODOs and finishing up a security audit.”

Macs have an undeserved reputation for being malware-proof, but the likes of Knock Knock and iWorm demonstrate that Mac OS is not immune to software grinches, and that software scrooges are keen to make Mac owners' lives miserable.

Santa may therefore bring smiles the faces of girls and boys everywhere, once they stuff a download down their chimneys. ®