DEATH by COMMENTS: WordPress XSS vuln is BIGGEST for YEARS 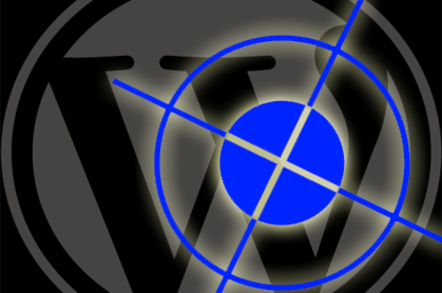 An estimated 86 per cent of WordPress websites harbour a dangerous cross-site scripting (XSS) hole in the popular comment system plugin, in what researcher Jouko Pynnonen calls the most serious flaw in five years. The bug could provide a pathway for attacking visitors' machines.

The WP-Statistics plugin lets attackers inject JavaScript into comments, which can then infect reader computers or those of administrators.

The flaw has existed for about four years, affecting versions between 3.0 to 3.9.2 - but not version 4.0, which handles regular expressions differently.

Version 4.0.1 patched a separate and also critical set of XSS flaws discovered by the internal security team, along with a cross-site request forgery hole.

"An attacker could exploit the vulnerability by entering carefully crafted comments, containing program code, on WordPress blog posts and pages. Under default settings comments can be entered by anyone without authentication," Pynnonen said.

Program code injected in comments would be inadvertently executed in the blog administrator's web browser when they view the comment. The rogue code could then perform administrative operations by covertly taking over the administrator account.

Such operations include creating a new administrator account (with a known password), changing the current administrator password, and in the most serious case, executing attacker-supplied PHP code on the server. This grants the attacker operating system level access on the server hosting WordPress.

In light of the server-side impact the unauthenticated default exploit is "probably the most serious WordPress core vulnerability that has been reported since 2009", according to Pynnonen.

He developed a proof-of-concept exploit that mopped up evidence of injected scripts before quietly using the plugin editor to write attacker-supplied PHP code on the server, changing the user's password and creating an administrator account.

Attackers could then write more PHP code to the server through the editor. This code was instantly executed using an AJAX request to gain operating system-level access.

He has created a work-around plugin for administrators who are unable to upgrade their WordPress servers.

A third set of recently patched XSS in WP-Statistics has been discovered by Sucuri researcher Marc-Alexandre Montpas. The stored and reflected XSS in versions 8.3 and below of the WordPress plug-in also turned attackers into admins, permitting black hats to inject search engine optimisation (SEO) content into unrelated blog posts.

"... the problem is very simple," Montpas wrote in a Nov 20 blog post. "The plugin fails to properly sanitise some of the data it gathers for statistical purposes, which are controlled by the website's visitors."

"If an attacker decided to put malicious Javascript code in the affected parameter, it would be saved in the database and printed as-is in the administrative panel, forcing the victim's browser to perform background tasks on its behalf.

"XSS does allow an attacker to modify the HTML of the site," Ullrich said.

"WordPress developers did attempt to implement the necessary safeguards [since] only certain tags are allowed, and even for these tags, the code checked for unsafe attributes.