And a floating carrier for recyclable rockets 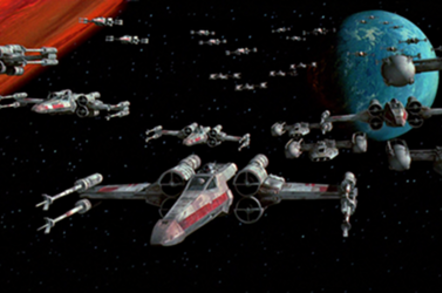 Pics and video SpaceX boss Elon Musk has been showing off steerable wings on his company's Falcon rocket booster – and a floating landing pad to catch the reusable craft out at sea.

Musk revealed the tech in a series of tweets over the weekend. He said future builds of the Falcon rocket system would carry stabilizing tabs – dubbed "X-wings" – that will guide the booster back to sea level for reuse. Recycling rockets is a key part of Musk's plans to slash the cost of getting cargo into orbit.

The four wings on the side of the Falcon booster are independently controllable to allow flight crew to adjust the rocket's fall back to Earth. If the expensive first stage of the rocket can be landed in one piece, it can be sent back up again, saving money.

SpaceX has shown the viability of landing a rocket after a launch with numerous tests at its spaceport, but bringing down a proper commercial launch has been somewhat problematic. For regulatory reasons it's safest to do this offshore, but the Falcon's first test landing over the sea went unwitnessed after bad weather kept the support ship at bay.

Video footage recovered from the test landing showed the rocket was able to make a controlled fall back to Earth before falling over and going into the drink. Now Musk has shown off his design for a seaborne landing pad that will catch the falling rocket and return it to base for reuse.

Musk's rocket carrier consists of a flat-topped ship with 300 by 100 feet of deck space available for landing the Falcon rocket. The ship can extend its surface-side area with extra 170 foot wings on the sides.

So far so good, but the sea is a harsh mistress and rocket landings are subject to the vagaries of the weather. So SpaceX has repurposed thruster engines from deep-drilling oil rigs to stabilize the vessel, and Musk claims they'll be able to hold the platform to within three metres of position, even in a heavy storm.

That may be so, but – as any navy pilot will tell you – landing at sea means not only landing in position, but also with the deck pogoing up and down like a Clash fan in 1981. It remains to be seen if a top-heavy rocket booster can successfully land and be safely secured in heavy seas.

If SpaceX can make this reusable rocket system work, and it's a big if, Musk will have succeeded in significantly reducing the cost of getting kit into orbit, which will be crucial if we have any serious plans to get off this rock and start exploring space any time soon. Sure, a space elevator would be great, but in the meantime it's rockets or nothing. ®