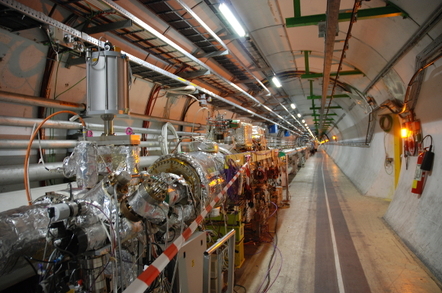 Analysis of Large Hadron Collider data collected in 2011 and 2012 has turned up two new subatomic particles: a couple of baryons that are six times as massive as a proton.

The atom-smasher's LHCb experiment produced data that looks a lot like particles designated Xi_b'- and Xi_b*- which were first predicted by Canadian particle physicists Randy Lewis (York University) and Richard Woloshyn of the TRIUMF physics laboratory in Vancouver.

The two baryons each comprise three quarks bound together by the strong nuclear force, according to CERN's media release.

Each of the two particles has one beauty (b) quark, one strange (s) quark and one down (d) quark. It's the beauty quark that gives the baryons their mass, while the difference between the two is in spin: in the Xi_b' state, the strange and down quarks spin in opposite directions, while in the Xi_b* state the spins are aligned.

The alignment of spin also means the Xi_b* baryon is a little heavier than the Xi_b'.

Fans of exotic physics might be disappointed, since these two particles fit the Standard Model predictions of quantum chromodynamics (QCD), but can take heart that the current work is given a 95 per cent confidence level. That makes it a strong observation, but it'll have to be refined a lot before anyone sends missives to the Nobel committee.

In the CERN release, Matthew Charles of the CRNS LPNHE laboratory at Paris VI University says: “Nature was kind and gave us two particles for the price of one. The Xi_b'- is very close in mass to the sum of its decay products: if it had been just a little lighter, we wouldn't have seen it at all using the decay signature that we were looking for.”

The new work is at Arxiv in pre-print here, and has been submitted to Physical Review Letters.

The Lewis / Woloshyn prediction cited in the new paper can be read here. ®