Mirai released only in Japan ... for now 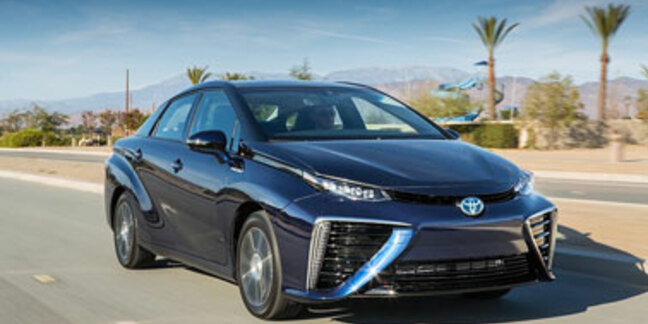 Toyota will launch its all-new Mirai hydrogen fuel cell vehicle in Japan on 15 December before introducing it in the UK and other selected European markets in September 2015, with that date dictated by getting a refuelling infrastructure rolled out.

Fuel cells, which produce electricity directly as they combine fuel with oxygen (as opposed to producing mechanical power from heat which is then turned into 'leccy by a generator) have been the power of the future for nearly 100 years, and even provided some fizzy drinking water as a by-product of powering the Apollo landers (the Space Shuttles also used fuel cell exhaust as drinking water).

Mirai uses the Toyota Fuel Cell System (TFCS), which brings together fuel cell and hybrid technologies. It includes Toyota’s new, proprietary fuel cell stack and high-pressure hydrogen tanks. Toyota claims this is more energy efficient than internal combustion engines and emits no CO2 or pollutants when the vehicle is driven. That is Toyota dodging the issue of where the hydrogen comes from – it is normally made industrially from natural gas, which involves considerable carbon emissions, though Toyota prefers to speak of getting it from sewage* – and what is needed to pressurise it. Fuel cells combine the hydrogen with oxygen, hence the gaping vents in the front for breathing and cooling.

Toyota points out that there are distinct advantages over other forms of electric power as the system has a range of 300 miles and a hydrogen refuelling time of around three minutes. But with a top speed of just 111mph and a 0-62 time of 9.6 seconds, it’s way behind a Tesla S, let alone a Tesla D. This is clearly not helped by the Mirai having a kerb weight of 1,850kg.

The limiting factor on performance is the maximum power output and for the stack in the Mirari that’s 153bhp (114kW) at 650 volts. Toyota is proud of this as it has been improved by using 3D fine mesh flow channels which ensure uniform generation on the cell surfaces.

The amount of water on the fuel cell electrolyte membranes has a substantial influence on electricity generation efficiency. The amount of water is controlled using an internal circulation system to carry water produced in the electricity generation process. This makes the Toyota FC Stack a world-leading system that, unlike those used in all other previous Toyota fuel cell vehicles, doesn’t require a humidifier.

Filling a car with something as explosive as petrol is pretty dangerous, but pressurised, to 700bar, hydrogen poses an additional level of risk so the car has two carbon fibre-reinforced plastic tanks well inside the wheelbase and mounted low.

There are leak detection and stoppage systems, and tanks and other hydrogen-related parts are all outside the cabin, so that if there is a leak, the hydrogen will disperse easily. Putting major parts such as the FC stack and high-pressure hydrogen tanks centrally beneath the vehicle floor gives improved handling stability and ride comfort, as well as a low centre of gravity and good front/rear weight distribution.

A pre-collision system with millimetre-wave radar could help prevent collisions, or reduce damage in an impact by triggering driver alerts and (if a high collision risk is detected) brake control.

An interesting design feature is to make the heat sinks for the LED headlights visible. Mirai runs on 17-inch aluminium wheels which have been made lighter by the use of an engraving process. This manufacturing process to reduce the weight of aluminium wheels involves shaving metal from the intersecting line between the disc and rim. This reduces individual wheel weight by approximately 500g.

This is very much a halo project with European sales forecast at 50 to 100 cars a year over the next two years so you can expect it to be more than an optioned Tesla at £100,000. ®

*Nobody argues that much of today's energy demand can be satisfied by processing sewage: there isn't enough of it. Running one car would require the poo of many households.

In a future where hydrogen was widely used it would obviously not make much sense to keep making it from natural gas - you might as well just run the vehicles on gas, as indeed is often done today. It's generally assumed by hydrogen advocates that in their desired future, hydrogen would be produced by electrolysing water, such that the hydrogen part of the energy system would involve no carbon emissions or pollution whatever.

Unfortunately that still begs the question of where the power would come from to electrolyse the hydrogen. Realistic hydrogen advocates mention nuclear at this point, dreamers consider that it could all be done with renewables. - Ed