There it is! Philae comet lander found in existing Rosetta PICS 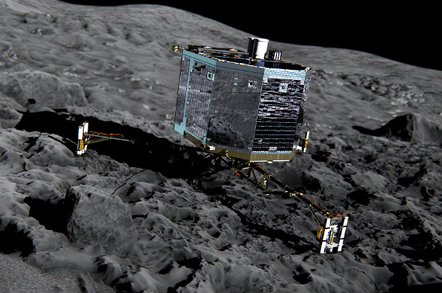 European Space Agency (ESA) boffins reckon they may have located the final touchdown site for their comet-intercepting Philae lander, after its bouncy landing caused them to lose track of it temporarily.

Philae's touchdown site seen by Rosetta's navigation camera. The first image in this sequence was taken on 12 November at 15:30 UTC, just before the lander's first touchdown; the second image was taken at 15:35 UTC, right after touchdown. The large red circle indicates the position of the shadow of the dust cloud caused by the landing. The third image in the sequence is the same as the second, with the likely position of Philae and its shadow highlighted. Credits: ESA/Rosetta/NAVCAM; pre-processed by Mikel Catania

Over the weekend, ESA published a series of NAVCAM images taken by mother-satellite Rosetta, where the lander’s initial landing appeared to be marked by a dark shadow, indicating the dust-cloud thrown up when Philae first touched the comet.

Upon further examination, ESA’s Flight Dynamics Team now think they’ve spotted Philae itself above the ground with a second shadow cast by the lander.

The historic craft shows up in the image as just a couple of brighter pixels, accompanied by its shadow in the form of a few darker pixels just below it. Credit for the discovery is going to Gabriele Bellei, from the interplanetary division of Flight Dynamics, although readers of the Rosetta blog also wrote in to say they thought they’d spotted the lander in the pics.

Philae is now in standby mode on the surface of Comet 67P/Churyumov-Gerasimenko after its battery power ran down. Before the lander went to sleep, ESA managed to send commands for the craft to try to shift itself around in the hopes that it could get its largest solar panel into a better position to catch the Sun and potentially recharge it.

The bouncing landing of Philae, which took it around a mile from its intended landing site, stuck the craft in the lee of a rock formation that has kept its solar panels mainly in shadow. Despite this, the plucky probot accomplished nearly all of the scientific investigations its team was hoping for and had enough juice to attempt the change in position.

Orbiting satellite Rosetta will continue its own scientific observations, while periodically checking to see if the lander has managed to wake up.

Meanwhile, the science teams for Philae’s instruments are hoping to get some early results from the data it gathered out today. ®