The Nokia ENIGMA THING and its SECRET, TERRIBLE purpose 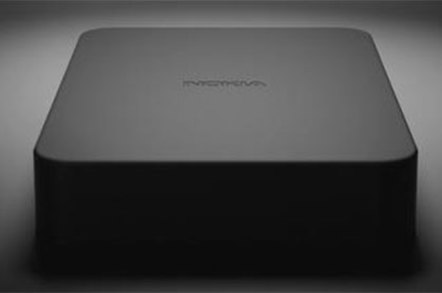 Ever since Nokia sold its Devices'n'Services unit to Microsoft, fans of the one-time Finnish titan have been wondering whether it will be able to regain its position as one of the world's biggest tech names. But with its surprise tweet of a mystery product on Monday, online buzz has gone into overdrive.

The Twitter post features a photograph of what looks like a black Mac Mini box with rounded corners and the familiar Nokia logo stamped on top, accompanied by the message, "Guess what? We're up to something."

There's no other text except the hashtag #thinkingahead and a link to the website of the Slush 2014 conference in Helsinki, Finland.

So what could this mystery project be? Here at Vulture Annex in San Francisco, we put our finest brains together to come up with a few possibilities. In no particular order, here are our best guesses.

With Microsoft dreaming of double-digit penetration into the smartphone market, now may be the time for Nokia to pounce in the other direction. A new, ARM-based desktop system could be just the thing for Nokia to breathe new life into its moribund Symbian OS, especially if it went with a 64-bit CPU – for, uh, processing Big Data. From the Internet of Things.

That "up to something" line could be a dead giveaway. Most people check the time on their phones these days, rather than on wristwatches. So who has more experience telling people the time than Nokia? The Finns could be planning the ultimate bedside accessory, offering split-second accuracy to make sure you get "up to something" on time, every time.

3. Something you plug into a TV

Apple has no monopoly on rebranding Foxconn-built kit, and Nokia's mystery product does bear more than a passing resemblance to the Apple TV. It could be that the Finns are looking to get into the streaming media business, what with the acres of market space between all the HDMI sticks, set-top boxes, video storage boxes, Google's Android TV and Nexus Player, and more.

Microsoft may have bought Nokia's phone business but that doesn't mean the Finnish firm can't bring people the mobile experience. By offering a box that provides remote access over VPN to any smartphone, Nokia could help ensure that Instagram-hungry customers can stay glued to their apps 24/7 ... even when they've lost their phones.

In the US's recent mid-term elections, Alaska, Oregon, and the nation's capital of Washington DC all voted to legalize cannabis. This could be an ideal opportunity for Nokia to apply its consumer electronics prowess to the nation's latest legal pastime. Watch out for possible marketing spots featuring Snoop Dogg.

Sometimes a box is just a box. Microsoft hasn't managed to make much of a splash with its Lumia smartphones, but demand for pizza remains strong worldwide. What better way for Nokia to regain its stature than by delivering one of the world's most popular foods in unique, modern packaging?

But maybe pizza isn't thinking forward enough. Customers have waited months to get their supply of Soylent's food-replacing gloop. Maybe Nokia is planning to get in on that market? Just imagine sinking a cake knife into that velvety black square and slicing off a wedge of nutrient-rich gelatinous goodness, straight from Espoo, Finland.

Landfills everywhere are becoming home to countless plastic and glass quadrangles as smartphone freaks upgrade their mobes to newer models each year. Now you'll be able to go to your final resting place in the same slick style as your last Windows Phone, thanks to a padded pine box from Nokia with 21st-century styling. 4G LTE connectivity optional.

Many expected ex-Nokia CEO Stephen Elop to get the top job at Microsoft after Steve Ballmer stepped down. But although that job eventually went to Satya Nadella, Nokia might still be planning to seize the reins in Redmond. Its new device could be an AI appliance that comes preprogrammed with phrases like "devices and services," "experiences," and "universal apps" and can respond to Microsoft's current share price in real time, complete with a reassuring Siri-like voice.

Got other ideas of what Nokia could be up to? Leave them in the comments, but from the sound of it you won't have long to wait to find out what the Finns really have in store. The Slush 2014 conference takes place on Tuesday and Wednesday in Helsinki, and Sebastian Nyström, Nokia's head of product business, is due to give a 20-minute talk on Tuesday. ®