With 1GB of RAM and 16GB of storage, the E Fun Nextbook will be anything but 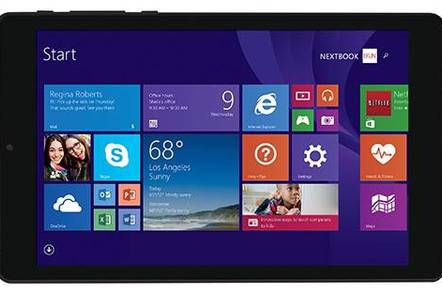 Walmart, that well-known purveyor of the finest America has to offer, will flog a $99 Windows 8 tablet for this year's Black Friday.

As you'd expect at that price, the E Fun Nextbook is an utter dog: it has a 1.8GHz Intel Atom processor with 1GB of RAM – the bare minimum for Windows 8.1 to function.

The tablet has a 0.3Mp camera on the front and a 2Mp cam on the back, so you can videoconference like it's 1999 all over again.

Other than that you get an 8-inch 1280 x 800 screen, 802.11n Wi-Fi and Bluetooth 4.0 for connectivity, and a miniHDMI port and microSD card slot. As a special offer, anyone buying the fondleslab before New Year's Eve will get a 16GB microSD card free – and they'll need it since the E Fun only has 16GB of internal storage. Windows 8.1 will take up a chunk of that once all the patches have been applied.

Even accounting for the sub-par hardware, $99 is still dirty cheap – which is why it fits in with the rest of Walmart's products. That's possible because Microsoft is giving the manufacturer the operating system, and a year's subscription to Office 365, free of charge.

In April, at Microsoft's Build developer's conference, Terry Myerson, executive vice-president of Microsoft's operating systems group, announced that device manufacturers building Windows systems with less than nine inches of screen would get the OS free of charge as part of Redmond's quest to keep Windows from being sidelined.

As strategies go it makes some sense, but when you get a piece of junk like this running Redmond's operating systems, the policy may turn more people away from Windows than draw them into eternal loyalty. ®