When androids dream of baseball fields 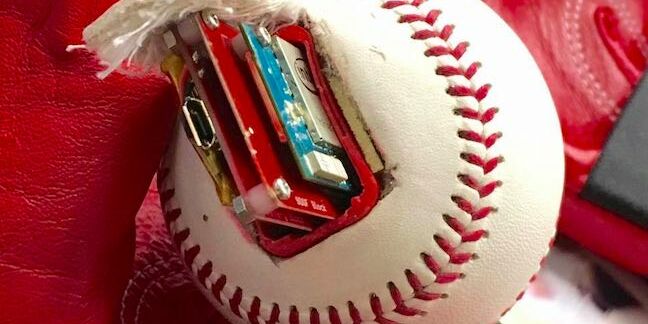 To our American cousins, it's a manly sport called baseball. But here in old Blighty, much the same game - rounders - is played mainly by schoolgirls. Whereas in Japan, it's played by robots.

A team at the Ishikawa Watanabe Laboratory at the University of Tokyo are developing machines which can perform all the same tasks as a good baseball player, including legging it from base to base.

"We have been developing robotic systems that individually achieve fundamental actions of baseball, such as throwing, tracking of the ball, batting, running, and catching," the Japanese bat-n-ball boffins write. "We achieved these tasks by controlling high-speed robots based on real-time visual feedback from high-speed cameras."

In a video entitled "Towards the Dream of a Baseball Android", the Japanese robo-wranglers show how their creation can mimic the movements of human fingers in order to throw a ball.

It uses a technology called Active Vision System to achieve a wide field of view by rotating a camera in three dimensions. For spotting high speed balls, it can move two mirrors rather than the whole camera, allowing it to whack or catch even the fastest of flying objects. This tracking system updates every millisecond, and is crucial in both pitching and batting.

Once it has walloped the ball, the robot can run at just over 4km an hour.

The team have developed two robots which can catch balls. One has a fixed hand whilst the other can open and close its fingers 10 times per second.

There is just one small problem with the technology: it hasn't all been put into one robot just yet. So baseball players can rest a little easier today, because their robot overlords won't be taking the field just yet. ®