FALL of the MACHINES: How to KILL the Google KARATE BOT, by our expert

'That power cable to the wall plug is his WEAKNESS' 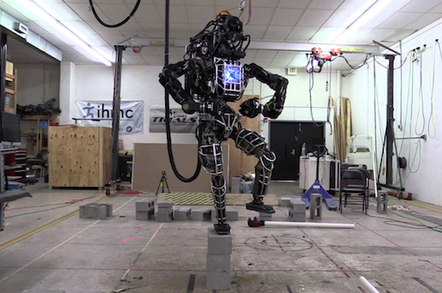 Martial artists and ninjas the world over could be forgiven for feeling a little nervous when Google-owned automaton builder Boston Dynamics unveiled a new fighting robot called Atlas.

But The Reg can exclusively reveal that this new robot is about as tough as Dale Winton on crutches after our resident kung-fu ninja said defeating this hydraulically powered nemesis would be a simple matter.

Named Atlas, the new machine stands 6ft 2in (1.88m) tall and weighs in at 330lbs (150kg), making him morbidly obese in human terms. He boasts 28 hydraulic joints and can walk on two legs, which is a clear improvement on the robo-Cheetahs, metal mutts and, erm, dainty wee cyber-fleas Boston Dynamics has made in the past.

The robot is shown in the crane position most associated with Daniel-san, lead character in The Karate Kid, who stood on one leg before delivering a mighty kick right into his opponent's mush. Impressively, it can pull off this trick whilst balancing on a pile of bricks. It has not yet been revealed whether he can catch a fly with chopsticks, Mr Miyagi-style.

However, in a move designed to destroy this machine's hard-RAM credentials, the team who designed the robot have dubbed it Ian – hardly a name which inspires terror.

In a statement, the robo-wranglers said: "Atlas can walk bipedally leaving the upper limbs free to lift, carry, and manipulate the environment. In extremely challenging terrain, Atlas is strong and coordinated enough to climb using hands and feet, to pick its way through congested spaces."

Researchers at the Florida Institute for Human and Machine Interaction also programmed Ian so he could drive a car.

"To achieve this level of manoeuvrability in robots, we look toward nature," the team said.

"Inspired by the speed of cheetahs, the endurance of horses, the manoeuvrability of monkeys, and the versatility of humans, our researchers are on a quest to develop legged robots that are fast, efficient, and graceful, with the mobility required to access many of the same places that humans can."

So should we be scared? Happily, the answer is a big fat "no!".

Joe Fay, group editor at El Reg and our in house martial arts expert, wears a brown belt in jujitsu.

He said there was no need to be wary of this robotic Crappy Chan.

"Karate tends to be very linear, whilst jujitsu is flowing and circular," he said. "If this robot came at me, I would work around it, get on its dead side and then unplug it.

"I'd be a lot more scared if it had a battery pack. That big tube hanging out of its arse is clearly a weak point."

So Akidon't try it with The Reg, Ian, or you'll get a karate gigachop right in your CPU. ®