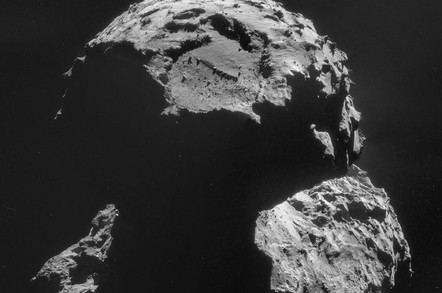 The European Space Agency is at the eve of one of its most ambitious projects: the passive landing of a small scientific craft on the surface of a comet that’s hurtling through space at over 60,000kmph. Your El Reg correspondent will be reporting from the ESA control centre at Darmstadt, Germany, bringing you the story as it unfolds. 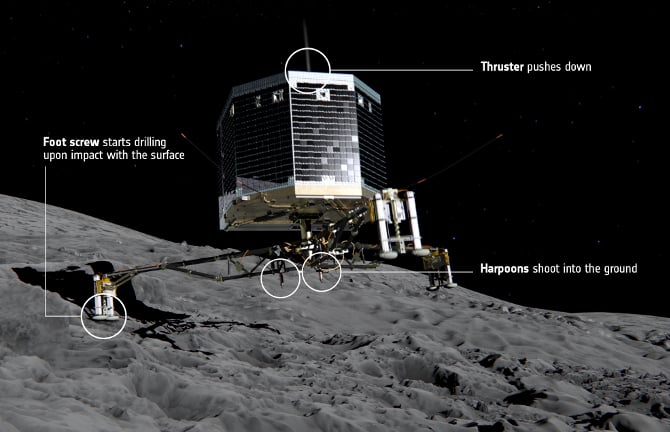 The agency hopes to accomplish a daring, slightly mental landing for the Philae craft, which is about the size and weight of a fridge here on Earth, but will be lighter than a feather in the weak gravity of comet 67P.

If they get the go-ahead, the unmanned science lab will detach from scout Rosetta and basically drift down onto the surface of the comet.

After a journey of over 10 years across the Solar System to get to the comet, Philae will take just seven hours to passively descend the last 20km to the surface, aiming for the landing site called Agilkia – an ovoid area just 900 metres by 600 metres in size.

This spot, originally called Site J before it was named after an island on the Nile River to match Philae’s island name, is indeed a little oasis, surrounded by the kind of nightmarish rocky, ravine and cliff-filled landscape that could smash little Philae to pieces.

Much of the surface of the comet is covered in boulders, some as large as houses, along with steep slopes, deep pits and towering cliffs, the ESA said.

Next page: “Although it may not seem like it, Agilkia presented the least hazardous terrain"
Page:
Tips and corrections
32 Comments