LG says will stick with it, but be ready to watch it cave in... 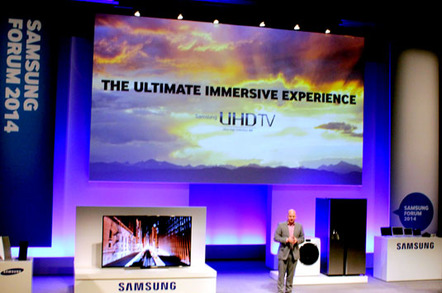 Analysis Samsung has said that it intends to focus on UHD TVs using LCD panels augmented by quantum dot technology, instead of pushing OLED as a commercial replacement for LCD. This is the kind of decision that might mean that OLED never takes off in the larger form factors.

Kim Hyun-Seok, the head of Samsung’s TV business, told reporters that the firm doesn’t intend to change its OLED strategy this year or next – meaning that it will look to quantum dots to wring the life out of LCD instead of taking the plunge to OLED.

Chief OLED rival LG said it will continue to pursue the OLED dream. “We will put everything into OLED as we are confident that it will replace LCD as the TV standard in the coming years,” said LG spokesman San Kim while showing off a new UHD OLED TV earlier this year.

Evidently Samsung disagrees, and it is planning on showcasing its new quantum dot tech at CES 2015. They can’t both be right, and this division will show in sales during 2015, we suspect.

OLED has been vaunted as the next-gen display technology for a few years now, with its improved colours and contrast over LCD. But the high cost of manufacture means that it was always unlikely to dethrone LCD until its cost came down, and that meant its yields had to rise dramatically.

Quantum dot (QD) technology also promises to improve the picture quality of LCD, but without requiring the industry to completely overhaul its manufacturing processes and retool. Like telcos and ISPs investing and clinging to copper lines instead of taking the plunge into fibre, the display manufacturers are married to LCD – and the divorce looks messy enough to deter them from change.

QD-LED arrays right now suffer the same cost problems as OLED, but to a much worse degree. Full QD-LED arrays are unfeasibly expensive to make, but the technology has found its way into backlighting which drastically improves the colour performance of LCD panels over LED backlighting. QD-LCD threatens to completely undermine OLED’s claims for superior color and brightness performance – eventually at a much cheaper price point and with improved power consumption to boot.

Quantum dots are nanocrystal particles made out of semiconductor materials. Due to their incredibly small size, the particles display the quantum mechanical property of quantum confinement – hence their name. The dots emit light according to their size, and are triggered by light or an electrical current. Smaller dots are nearer the violet end of the visible light spectrum, while the larger ones are at the red end.

The dots can be assembled into a full QD-LED array using a similar process to manufacturing OLED, but in LCD the dots will be used to create a colour filter film for the LED backlighting that negates crosstalk between the colour channels – which will allow engineers to calibrate the displays to output much better colour, while remaining relatively cheap to produce.

When Faultline first looked at QD, we found a company called QD Vision, which produces a QD film under the Color IQ moniker. The Color IQ tech has been used in Sony’s Bravia TVs, and has so far shipped 2 million units. QD Vision says that LCD panels can only natively reproduce 60 to 70 per cent of the NTSC color standards, but by adding its Color IQ film, those same panels can achieve 100 per cent. Another company, Nanosys, has a similar product called QD Enhancement Film (QDEF).

So what is next for OLED? It currently has a vibrant future in smaller panels, particularly in smartphones and tablets. Laptops could be the next major growth area, but not if the industry spends no more on R&D, to get it to be the central large-screen technology.

And this will likely throw up a few confusing consumer experiences - depending on the quality of QD TVs. If we get to a point where the average OLED tablet has a noticeably better picture quality than the TV, this could prove the tipping point that pushes TV the way of the HiFi.

Once upon a time, music was a live and communal experience. Then with the advent of recording technology, it became possible to place and time shift the experience – but due to the poor quality of headphones (which would make the listening experience private) listening remained communal, on large high fidelity systems that cost hundreds to thousands of dollars.

But as headphones improved and playback devices got smaller (cassette decks, Walkmans, and the tipping point that was the iPod) music become a predominantly private affair.

Live music is now an event as opposed to the norm, and it’s not hard to see video travelling that same road. That same journey is taking place with screens. Now video can be consumed on phones and tablets, with the only downside being the relatively poor quality of the audio – which is easily countered by using a pair of headphones.

TV as a physical medium, rather than its content, is already losing ground to smaller screens, largely due to their portability and ease of use. If picture quality, the last great bastion of the TV, is also undermined by tablets, then the communal-viewing living-room dynamic is as good as dead and buried. Ironically, small form-factor OLED might end up killing the use-case it has been forecast to transform.