Kryder's law craps out: Race to uber-cheap storage is voer

Bad news for cloud and archive

The 2011 Thai floods almost doubled disk capacity cost/GB for a while. Rosenthal writes: "The technical difficulties of migrating from PMR to HAMR, meant that already in 2010 the Kryder rate had slowed significantly and was not expected to return to its trend in the near future. The floods reinforced this."

HAMR is heat-assisted magnetic recording and the costs of migrating to this from current PMR (perpendicular magnetic recording) are anticipated to be huge. Rosenthal points out that "[i]n the real world, exponential growth can't go on forever, it is always just the steep part of an S-curve. It is now widely accepted that Moore's Law has slowed. Although transistors will continue to shrink for a few more generations, this will no longer result in transistors getting cheaper or CPUs getting faster."

... what looks like a smooth Kryder's Law curve is actually the superposition of a series of S-curves, one for each successive technology generation. Naturally, because the easy transitions get done first, the cost of each successive transition increases, perhaps even exponentially. Since margins are constrained and so, these days, are volumes, to generate a return on the investment in each transition requires that the technology be kept in the market longer. The longer interval between transitions translates to a lower Kryder rate. 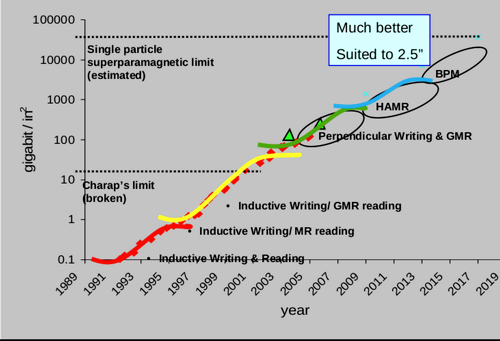 Kryder esses in a graph by Dave Anderson via David Rosenthal.

This slowing Kryder rate means that the service life for disk drives will lengthen. Each step change increase in capacity will take longer, be relatively more expensive, and disks will have to be engineered for longer life, meaning lengthier warranty periods.

Rosenthal also works out the effect of a 20 per cent per year Kryder rate (from IHS iSuppli), IT budget growth at two per cent/year, an IDC data growth projection at 40 per cent/year and storage at 12 per cent of the IT budget.

He reckons that, after eight years of this, the annual cost of storing all the data accumulated since year zero, relative to the cost in year zero, is 100 per cent of your IT budget.

Let's turn to the cloud and the Amazon/Google/Microsoft cloud storage cost reductions. The three are in a race to the bottom, a race to zero, so to speak, as they try to wipe out other cloud storage competitors and persuade corporates to store their data in their clouds.

Aaron Levie, the CEO of file sync 'n' share startup Box, which has raised $559m, has said: "We see a future where storage is free and infinite."

He is quite, quite wrong. It won't be free and it won't be infinite. And it won't be quite so necessary to provide added-value compute and other services alongside cloud storage to attract saying customers. Storage will change from its anticipated positioning as a loss leader. In the longer term it won't be a loss leader and suppliers will be able to charge for it.

The Kryder rate slowdown will see to that and business models based on a continuation of the Kryder at at pre-Thai flood levels will fail as their costs become untenable.

Already some infinite storage in the cloud models, like Bitcasa's, are being ended. The storage times they are a-changing and Kryder should soon find his law has crapped out. ®