Kryder's law craps out: Race to uber-cheap storage is voer

Bad news for cloud and archive 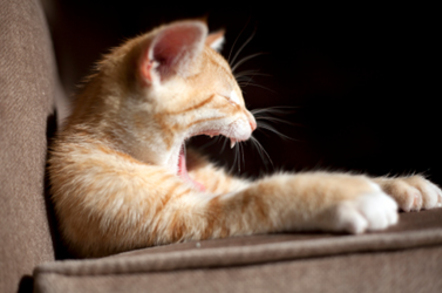 Analysis Kryder's Law says disk storage will keep on getting cheaper. Yet it is increasingly looking like it won't, which has baleful implications for cloud storage and archiving.

Like Moore's Law, Kryder's Law is (a) not a law, merely a wonderfully apt observation for a prolonged but not eternal period of time, and (b) borne of an incredibly bold and confident view of technology.

Mark Kryder was a Seagate SVP for research and its chief technology officer when an article titled Kryder's Law – where he was interviewed – appeared in a 2005 issue of Scientific American. The "Law" declares that disk drive areal density would more than double every two years, meaning disk drive capacity would do likewise.

Since the introduction of the disk drive in 1956, the density of information it can record has swelled from a paltry 2,000 bits to 100 billion bits (gigabits), all crowded in the small space of a square inch. That represents a 50-million-fold increase.

That 50 million increase took place over 41 years, a rate of improvement fantastically faster than Moore's Law, which, the article said involves, "doubling the power and memory of computer semiconductors every 18 months".

What has happened is that it is getting progressively more difficult and much more expensive to keep on cramming bits onto disk platters. Kryder's Law is "slowing down", so to speak.

David Rosenthal is an engineer who worked with James Gosling at Carnegie-Mellon University on the interface in the Andrew Project, moving on to operating systems' windowing interfaces with Gosling at Sun. He then moved to Nvidia, as employee number 4, to work on graphics chip. His DSHR blog focuses on long-term data storage.

In May this year, he blogged about a talk he gave at Seagate entitled "Storage will be much less free than it used to be." His speech reviewed the progress implied by Kryder's Law:

After more than a quarter century of Kryder's Law, the exponential increase in disk capacity at constant form factor, and thus exponential decrease in $/GB, almost everyone believed that long-term storage was effectively free. 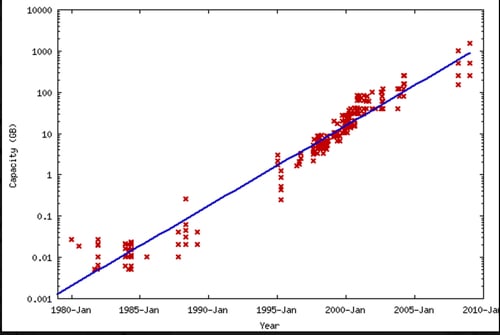 Rosenthal discusses "the Kryder rate (the annual percentage drop in $/GB)" and says it is slowing, citing a graph from Preeti Gupta at UCSC in support. 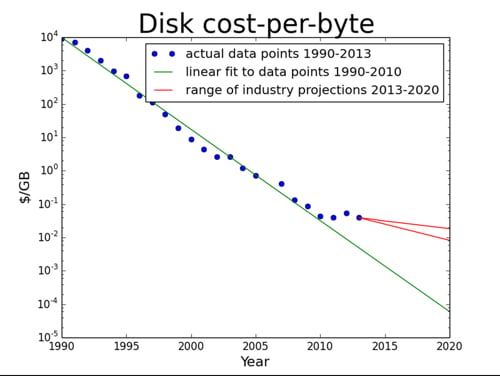 This graph "shows that disk is now about seven times as expensive as it would have been had the industry maintained its pre-2010 Kryder rate."