Got an iPhone or iPad? LOOK OUT for MASQUE-D INTRUDERS 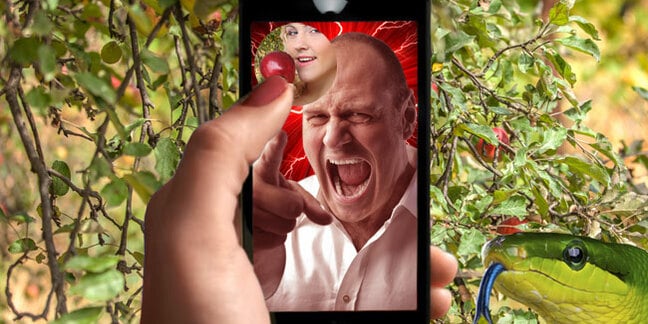 Security experts have now probed further into the vuln in non-jailbroken iOS 7 and iOS 8 devices which was exploited by the previously revealed WireLurker USB-hopping malware.

Dubbed a “Masque Attack”, the tactic allows hackers to install iOS apps on iPhone or iPad via email or text message. The attack takes advantage of a security weakness that allows an iOS app with the same file name – regardless of developer – to replace a legitimate app on a post-iOS 7 device while keeping all of the user’s sensitive data.

The malicious app has to be signed using an enterprise certificate – normally useful for deploying software without having to go through the official App Store – and the user has to click through a warning.

The vast majority (95 per cent) of all iOS devices are potentially vulnerable, according to researchers at security biz FireEye.

A demo video put together by FireEye shows how it might be possible to replace a real Gmail app with a fake utility in order to steal the user’s login credentials, as well as collect all of their emails.

So the Masque Attack creates a means to replace genuine apps with malware on non-jailbroken iOS devices using social engineering trickery. Masque Attacks can happen completely over the wireless network, without relying on an infected-computer-to-iThing USB connection to spread WireLurker.

The Masque Attack also creates a means for hackers to successfully skirt detection by mobile device management software by taking advantage of Apple’s private APIs, which are usually reserved for standard iOS apps.

"Apple has been informed in July 2014 about Masque Attack," a Fireye spokeswoman told El Reg. "As far as we know, they are working on a fix."

"This vulnerability exists because iOS doesn't enforce matching certificates for apps with the same bundle identifier and the attacker can craft the message shown to the user at install time,” the spokeswoman continued. “After the malware replaces an authentic app, the authentic app's local data were not removed and these data were accessible to the malware."

FireEye's public release of information about the Masque Attack comes days after the discovery of WireLurker, the first malware capable of spreading onto non-jailbroken Apple iOS devices from infected Mac OS X systems.

If WireLurker shook up the widely held assumption that non-jailbroken iPhones and iPads were immune from malware, then the release of information about the Masque Attack further stirs the pot.

Pending the availability of a patch from Apple, FireEye advises iThings users to only install apps from Apple’s official App Store or the user’s own organisation, among other precautions.

Jeremy Linden, senior security product manager at mobile security firm Lookout, said that the Masque Attack represented a change in direction in where threats might come from and look like.

“In the past these types of vulnerabilities involved dropping an app on your phone, but one thing that’s new about Masque Attack is that it uses an icon that’s already on your phone and replaces the app behind it," Linden commented. "If you just saw a random banking app on page 5 of your iPhone, you’re not going to be eager to click it and enter your login credentials. But if you’re already trusting this icon, you might. Classic social engineering at play."

Linden said that there were a number of mitigating factors, chiefly the need for an attacker to "obtain an enterprise provisioning profile or steal one, neither of which are trivial".

In addition, there would also always be a warning to the user, which should look suspicious because it’s not something you would normally see in iOS. ®