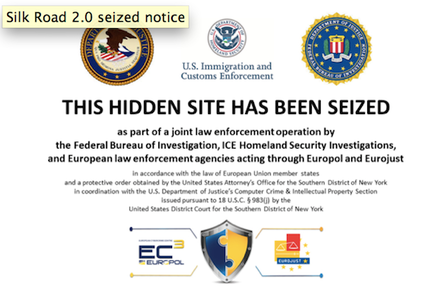 Officers from the National Crime Agency made the arrests over allegations their targets had been selling drugs or working as administrators for the dark web narcotics store.

All six suspects have been bailed following a police interview.

The arrests were part of an internationally coordinated strike that relied on intelligence from US federal agents. As British cops made the arrests, attack nerds from the European Cybercrime Centre took down a total of 400 dark websites.

Anyone who tries to log onto Silk Road 2.0 will now see a notice highlighting the site has been seized.

“Over the months since the original Silk Road was taken down, we have been working with partners in the US and Europe to locate technical infrastructure, key to the dark web and to investigate individuals suspected of significant involvement in illegal online market places. Those arrested by the NCA in this phase of the operation are suspected of setting up Silk Road 2.0, or of being significant vendors of illegal drugs.

“The operation is ongoing and more arrests can be expected as we continue to investigate those involved in setting up and profiting from these illegal market places. Criminals like to think that the dark web provides a safe, anonymous haven but in reality this is just like any other organised crime network. It may take time and effort to investigate and build a criminal case, but we are determined to identify and prosecute people caught dealing drugs and committing serious crime using the dark web.” ®