Poll: Yes, yes, texting while driving is bad but *ping* OH! Hey, GRAB THE WHEEL, will ya?

Many text-and-drive despite the dangers – 'because dopamine' 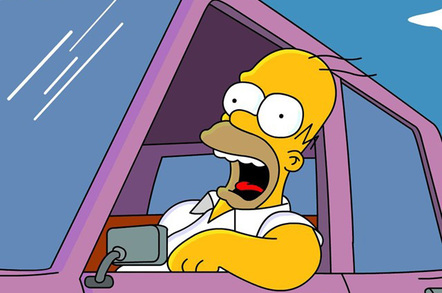 Despite widespread efforts to stop drivers texting while on the road, most people continue with the dangerous practice, according to new research.

AT&T and the Center for Internet and Technology Addiction polled 1,004 Americans, and found that while nearly all the respondents were aware of the danger, most still sent and read texts on their phones while behind the wheel.

Overall, the study found 98 per cent of those surveyed knew that texting while driving could cause an accident, but 74 per cent said they fiddled with their mobes anyway.

The figures come despite efforts from mobile networks and police to convince drivers to put away their phones. Despite multiple campaigns to dissuade texting behind the wheel, drivers continue the risky behavior.

In fact, research has found that when texting is banned, traffic accidents actually increase slightly.

Dr David Greenfield, founder of the Center for Internet and Technology Addiction, believes that we may in fact be given to ignore danger due to a physiological dependency many have developed with their smartphones.

"We compulsively check our phones because every time we get an update through text, email or social media, we experience an elevation of dopamine, which is a neurochemical in the brain that makes us feel happy," Greenfield said.

"If that desire for a dopamine fix leads us to check our phones while we’re driving, a simple text can turn deadly." ®