Two weeks of negotiations may have turned the ITU super-tanker 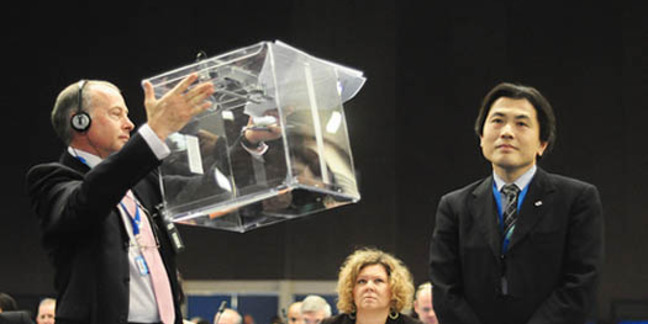 Analysis Efforts to squeeze the United Nations into the throne of the internet have been comprehensively defeated at a key meeting in South Korea.

The result raises the possibility that after more than a decade of fighting, the threat of a UN takeover is a thing of the past.

After more than two weeks of negotiations at the United Nations' ITU Plenipotentiary meeting in South Korea, revised versions of four key internet resolutions have passed through the working group stage and will be formally approved in the next few hours by the meeting's plenary.

In each case, proposed changes that would have given the ITU (the International Telecommunication Union) greater authority over the internet's evolution, have been pulled out – and some additions had been made that give existing internet organizations a greater say in future discussions.

With the conference setting the ITU's strategy for the next four years, and following a showdown in 2012 that saw some governments walk out the room when internet controls issues were pushed too far, the Busan Plenipotentiary of 2014 may come to be seen as a turning point for the huge ITU tanker.

The key changes comes in the revised version of Resolution 102, catchily called "ITU's role with regard to international public policy issues pertaining to the Internet and the management of Internet resources, including domain names and addresses."

There was a long list of proposed changes from a large number of different countries. But as temporary document DT76 [PDF], the final endpoint of negotiations, reveals, none of the additions that concerned internet organizations made it through, in large part thanks to concerted pressure by a number of Western governments, advised continuously by net specialists.

A new paragraph notes that "the public sector, as well as public-private and regional initiatives, continue to play a very important role in the expansion and development of the Internet." Another addition acknowledges "the need for development of international Internet public policy by governments in consultation with all stakeholders" (our emphasis).

An effort to expand government control over "public policy issues" when it comes to the internet was pulled back into noting that there are "sovereign and legitimate interests … regarding decisions affecting their [country code top-level domains] ccTLDs, need to be respected and ensured, upheld and addressed via a flexible and improved framework and mechanisms."

This reflects the position that has been reached over the past decade by the internet community, namely that governments have a lead role in deciding the network infrastructure within their own territory. It means however that the global internet will continue to work on principles devised by a broad range of groups.

One last key change: the group within the ITU that does all the work on internet issues, the CWG-Internet, will open up a little after two new paragraphs concerning its practices were inserted. From now on the CWG-Internet "should generally hold both open online consultation and physical open consultation meetings, with remote participation" and "relevant inputs received from stakeholders will be submitted to the CWG-Internet for consideration on the issues chosen for its next meeting."

In other words, the days of trying to sneak through changes via the ITU's byzantine decision-making processes are likely to be over.

Next page: Get your docs here! We've got the ITU PDFs
Page:
Tips and corrections
19 Comments