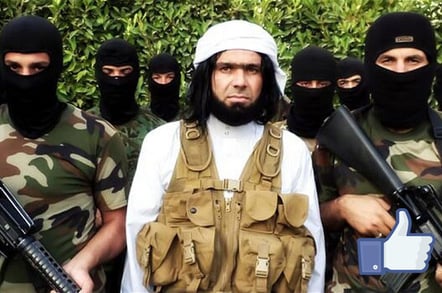 Pro-ISIS script kiddies defaced the website of Rugby League team the Keighley Cougars over the weekend in the latest of a series of attacks against somewhat obscure targets.

The West Yorkshire club's home page was replaced by a black screen and the message: "I love you Isis" with the tag "Hacked By Team System DZ" at the top of the screen. The defacement also featured the auto-played recording of music, and singing and written claims that the "State of Islam" is expanding, the Daily Telegraph adds.

The rugby club's website had been returned to normal by Monday morning. The club apologised for getting tackled in a Twitter update.

Counter-terrorism police are investigating the hacking of ‪the website, according to local reports.

The same Team System DZ group hit the University of New Brunswick Student Union website in a strikingly similar defacement three week ago. Around the same time a synagogue website in south Florida was defaced with a message calling for the "elimination of America and allies of the infidels".

Other targets have included the website of Kosha Dillz, a prominent pro-Israel rapper, and a seafood restaurant in Florida.

They are often the online equivalent of pulling down a poster put up by an organisation and putting up something created by attackers who aren't skilled enough to do anything else.