Branson: 'We are determined to find out what went wrong' 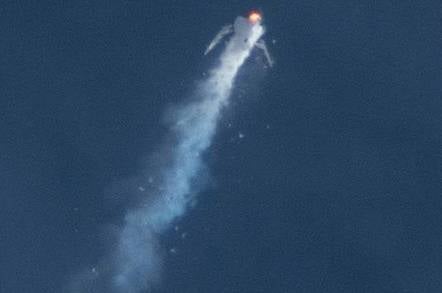 Vid A co-pilot killed during a catastrophic test flight of Virgin Galactic's SpaceShipTwo has been named.

Michael Alsbury, 39, died in the tragic crash on Friday, while Peter Siebold, 43, was seriously injured.

Siebold, who is the director of flight operations at Scaled Composites – Virgin Galactic's builder and designer – was piloting the commercial, passenger spaceship during a test flight over the Mojave desert in California.

Alsbury was found dead in the 'craft.

The company said in a brief statement that Siebold was "alert" and talking with family and doctors. It added:

We remain focused on supporting the families of the two pilots and all of our employees, as well as the agencies investigating the accident.

British billionaire Richard Branson, who rushed to the scene of the crash late on Friday, said:

"We are determined to find out what went wrong and are working with the authorities to get that information. It is too early for me to add any details of the investigation at this stage."

Branson reportedly admitted during a press conference in Mojave that his company had suffered a serious setback in its space tourism plans.

He was quoted as saying:

"If we can overcome it, we will make absolutely certain that the dream lives on."

SpaceShipTwo's rocket engine was, according to experts, filled for the first time with a propellant ignited by nitrous oxide. An investigation carried out by the National Transportation Safety Board in the US is expected to focus on the usage of that fuel in the aircraft.

The agency said that the probe could take up to a year to complete. ®