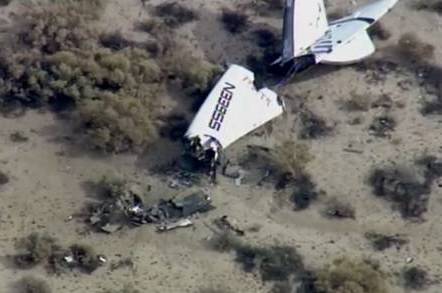 Richard Branson raced to the scene of a Virgin Galactic test flight tragedy last night, after the company's SpaceShipTwo crashed killing one pilot and left another seriously injured.

In a blog post, the British billionaire businessman said he want to be in Mojave, California "with the dedicated and hard-working people who are now in shock at this devastating loss."

As The Register reported yesterday, Friday's crash destroyed SpaceShipTwo during its 55th test flight. However, Virgin Galactic and Scaled Composites have vowed to continue the space programme.

"Everyone at Virgin Galactic, The Spaceship Company and Scaled Composites is deeply saddened by today’s events. All our thoughts are with the families of everyone affected by this tragic event, and we are doing everything we can to support them," Branson said.

"We will cooperate fully with all the authorities involved in the investigation, and share more information when possible."

Branson quoted NASA's comments on the privately-funded mission. The US space agency said:

Space flight is incredibly difficult, and we commend the passion of all in the space community who take on risk to push the boundaries of human achievement.

"Space is hard – but worth it. We will persevere and move forward together." ®