Take me dancing naked in the… graveyard 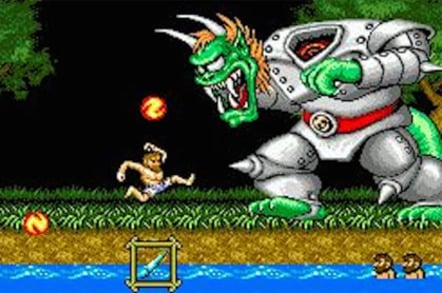 Antique Code Show In the build-up to the Halloween of 1985, Capcom lobbed this little box of horrors into the unsuspecting crowd of arcade dwellers. With mid-'80s goggles on, it’s easy to see why Ghosts ‘n Goblins gathered attention with its spooky but colourful visuals, alongside some memorably atmospheric ditties and effects. 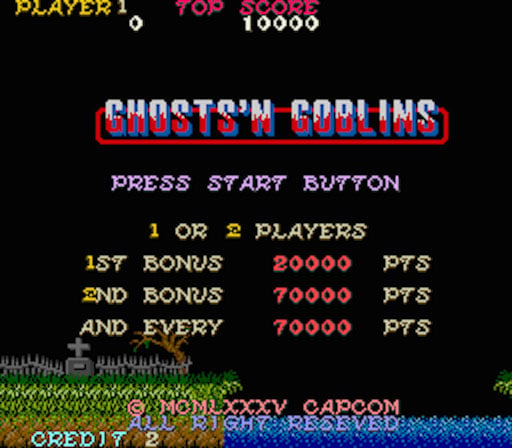 You'll be back here quite a lot

Yet while the demons and apparitions were never going to leave anyone shaking with fear, the difficulty level was a huge hammer blow to players. This was one very tough blood-splattered cookie – has there ever been an arcade title quite as brutal?

Creators Capcom took the legend of King Arthur as vague inspiration, and we see our protagonist at the beginning of the game nonchalantly hanging out half-naked with Princess Prin Prin. They’re in a graveyard as well – really, he pretty much deserves to have his bird nicked by Satan, which is exactly what does happen. 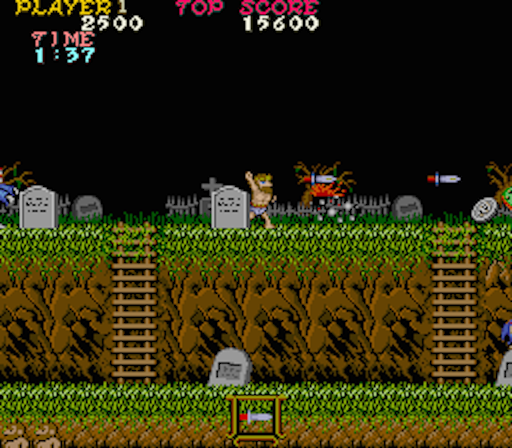 Caught in his pants again, now throwing daggers in the graveyard

You could quibble about the game’s originality by pointing out that it half-inched the ladders from Donkey Kong and power-ups weren’t exactly a new concept, even in 1985.

But that would ignore six well-designed levels, varied weapons and power-ups, enemies with many attack formations, and the oversized bosses. Of course, the way Sir Arthur loses his armour when hit and is left in his pants – giving him one last chance before death – is an infamous moment of game design history.

Certainly, Ghosts ‘n Goblins was Capcom coming out to stamp its authority as one of Japan’s premier game producers. And you know it made a lasting impression when you find polished video tributes floating around the net.

Still, that monstrous difficulty level was always going to be divisive amongst gamers, some swearing and walking away in a huff, others persevering and indeed relishing the challenge of remembering when each and every enemy appeared and how to deal with them. It was relentlessly unforgiving and teeth-grindingly frustrating at times, whether it was zombies appearing under your feet, the zap of a fire-breathing plant or the extra low swoop of a demonic knight.

There was additional toughness as well – real nasty stuff. Perhaps you thought you’d done well enough to defeat the last baddie in level six’s finale? Well, if you failed to use the cross weapon in battle, then back to the start of level five you went. Onwards you would persevere, finally beating the guardian using the fabled cross weapon – only to find yourself transported back to the very beginning of the game. All an illusion by Satan, you see – true knights fight through the whole thing once more. 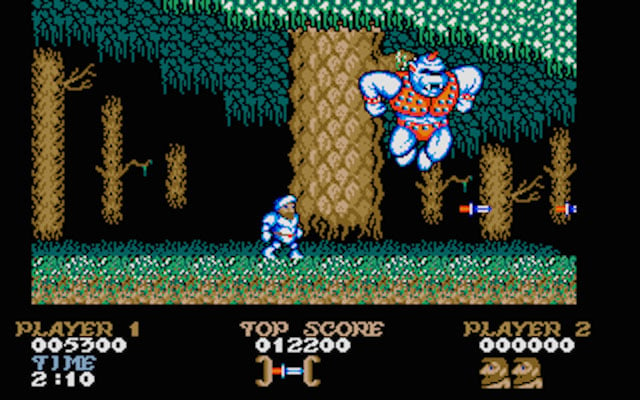 First boss on the Atari ST

Like many a child of the 1980s arcade, the ultimate joy – nay, what appeared to be the meaning of life itself – was to be gifted a perfect home conversion of your favourite arcade hit. Yet all too often, the experience many of us knew was humiliating disappointment as lesser games scratched and beeped onto screens. Ghosts ‘n Goblins was no different, though some of the conversions offered up – many by Elite Systems – were reasonably good in their own right.