New iPads look a lot like the old one. There's a reason for that 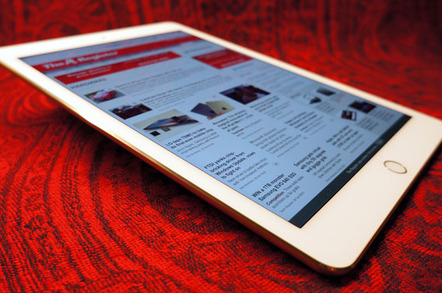 New iPad Air 2 components cost Apple just one dollar more than the previous model, according to the teardown bods at IHS.

The no-frills 16 gigabyte Wi-Fi flavour of fruity fondleslab reportedly costs Apple about $275 (about £167), compared to $274 for the first iPad Air.

Seeing as the iPad sells for just under £400, this would mean Apple is raking in £230 on the sale of every slab.

IHS analyst Andrew Rassweiler said: “Overall what we’re seeing is a series of refinements from iPad Air 1, nothing earth-shattering at all. But that’s par for Apple’s course.”

The most expensive bit of the iPad is its display, which doesn't really change all that much between generations.

“It’s basically the same display from before, the same size, the same resolution, but with an anti-reflective coating added,” Rassweiler said.

It costs $77, amounting to 28 per cent of the total cost of all the component cost, and is manufactured by LG Display and Samsung.

In plain terms, all this indicates that Apple is pretty much selling us the same bloody thing as last year, with a few minor tweaks. Very much par for the course.

Apple does not announce how much profit it makes on each device, although it is known to have a gross profit margin of 38.01 per cent. ®