Whoa, back up a little CommVault: ANOTHER weak quarter? 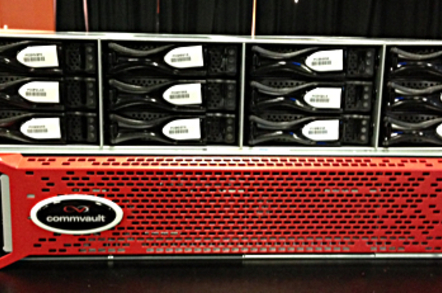 CommVault has reported a depressing set of results as sales headcount and mid-market product and pricing strategy faux pas cause a stumble – another stumble, in fact, as first quarter results were poor too.

Second quarter revenues of $151.5m were up seven per cent year-on-year but down one per cent on the prior quarter, with software performing badly.

The CommVault rising revenue and profits train has slowed, as the chart clearly shows:

The constantly rising revenue staircase has run out of steps. See how the profit trend has had a downwards turn?

Bob Hammer, the threeway boss of CommVault (he's chairman, CEO and president), said CommVault had "added additional field selling capacity as we continued to transform CommVault ... [but] we did not execute well enough to meet our own expectations for the quarter."

The previously reported faux pas in the sales organisation is casting a long and unwanted shadow.

Hammer put his future on the block by saying: "Since these issues are rooted in execution challenges that are well within our control, we remain confident that we can return CommVault to historical growth rates."

Stifel Nicolaus MD Aaron Rakers was unequivocal in his assessment: "There is no way around it, CommVault reported another (third) bad quarter. [The] company [is] pushing out its target of returning to a historical (high-teens/~20 per cent) yr/yr growth rate to 2HF2016."

He says CommVault new sales hires have a 12-month ramp to full productivity, implying a long haul to get growth up. He also says: "[The] company [notes] that it has left itself open in the mid-market vs. point-product solution providers." Oops.

William Blair's Jason Ader wrote in a note: "Management cited internal execution issues, mainly missteps on pricing, packaging, and marketing its products to the midmarket, together with some slowdown in large enterprise spending. ... Specifically, management stated that it failed to adjust its midmarket product pricing and positioning fast enough to address shifting customer buying preferences."

He added this: "Our reseller feedback echoed these comments, stating that customers are increasingly willing to introduce multiple best-of-breed point backup solutions rather than a single comprehensive platform priced on capacity (especially for virtual environment protection), which has been CommVault's long-standing sales pitch and primary differentiator."

Ader added: "This has been the crux of the problem rather than midmarket sales capacity (management even admitted that some sales people have left because of poorly positioned products). In addition, while CommVault defended its position in large enterprise, noting that it continues to win large deals and large customers generally prefer its singular platform at large scale, management admitted that some entry points in large enterprise are also being negatively affected by lack of proper pricing and packaging (e.g., test and development)."

But CommVault's sales funnel is filling and Rakers writes: "We do believe CommVault’s new pricing/packaging strategy (Simpana Solution Sets) will result in an improved competitive positioning and adjacent opportunities coupled with a now-available appliance strategy."

We saw an appliance at the NetApp Insight event in Las Vegas:

CommVault Backup Appliance with NetApp, showing E-Sries expansion shelf on top of the CommVault base unit.

It is built from a CommVault A600 appliance and an E-Series 2712 array, both 2U in rack size terms.

The A600 runs CommVault's Simpana software and has dual Intel Xeon E5-2620 processors and 8 x 480GB 2.5-inch SATA SSDs for the duplication database. The E-Series base controller unit has 12 x 2TB HDDs for 18TB capacity. Add a max of 7 x 2U expansion units to reach 288TB of usable capacity.

Commvault is the support contact for both HW and SW issues. In effect CommVault has become a NetApp E-Series OEM.

Smaller (mid-size) and customers and remote and branch offices can use a single appliance while larger ones can use a clustered set of appliances. A cluster can go to 10 apices or more with a 10 x 144TB appliance set offering more than 1PB of usable capacity. So, on that basis, a 10 x 288TB appliance cluster will be at 2.88PB. These is not a low-end system.

After the first appliance subsequent cluster nodes run in media agent mode only.