Jim Beam me up, Scotty! WHISKY from SPAAACE returns to Earth

They're insured for $1m, before you thirsty folks make plans 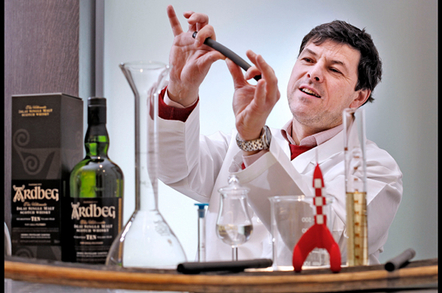 A Scottish distillery is celebrating the return of the first ever space-matured batch of whisky.

Back in 2011, the Islay-based Ardbeg distillery sent several vials of whisky to the International Space Station, where they were spun around the earth at 17,227 mph, orbiting 15 times a day for almost three years.

The astronauts up in the ISS were not allowed to neck the booze, sadly, because it was up there as part of an experiment to test how zero gravity conditions affected the maturation process.

Control vials were kept back at Arberg's Scottish headquarters and they will now be compared with the space dram.

A white paper will be published on the scientific research – and perhaps then someone will finally get to drink the well-travelled whisky.

Dr Bill Lumsden, director of distilling and whisky creation at Ardberg, said: “Ardbeg is known for taking risks in its development of some of the most coveted whiskies in the world, so it is fitting that it is the first whisky ever in space. We are now close to the end, close to finding answers to something previously unknown which is truly exciting.”

Don't get excited about getting pissed up on orbital grog just yet though, because the whisky is likely to command a hefty price tag.

“The whisky vials have been insured for one million dollars,” Lumsden warned. ®