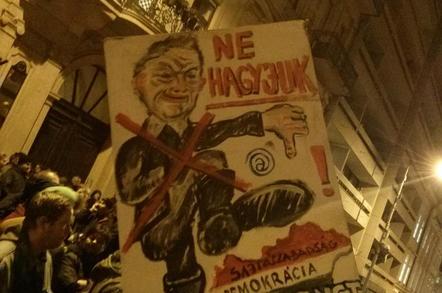 We cannot allow Hungary to set a precedent with its internet tax, the European Commission’s digital agenda spokesman said on Tuesday.

In response to questions from The Register, Ryan Heath – official mouthpiece for unelected digital czar "Steelie" Neelie Kroes – was scathing about Hungarian Prime Minister Viktor Orban’s plans to impose a tax on internet service providers of around €0.50 per gigabyte of data that travels over their networks.

“This must be seen in a wider context as part of a pattern to limit media and internet freedom,” said Heath. “That is why it is so important to tackle this now before a law is enacted. We have seen the pattern in Hungary where they announce a very tough law and then they moderate it in an effort to seem reasonable. But we cannot allow this issue to fade away.”

While the tax will be levied on ISPs, individual consumers worry the costs will be passed straight onto them. The reasoning behind Orban's announcement of a cap for people ostensibly not directly hit by the tax is unclear.

The EU's Heath said that the proposed tax is wrong and is an attempt to force people off the internet.

“It won’t work,” stormed Heath, “because you cannot tax a global common resource like the internet unilaterally. Furthermore, by targeting data they are getting it doubly wrong, because it’s impossible to predict data flows!”

Orban’s allies certainly seem to be falling by the wayside. Telcos and internet service providers have obviously opposed the tax, but now Zsolt Bayer, who co-founded Hungary’s ruling party Fidesz along with Orban, has also weighed in, saying that the "internet tax must be abolished immediately".

Thousands of protesters took to the streets of Budapest on Sunday and another demonstration is planned for 6pm on Tuesday – presumably to allow the office workers time to get there. According to some reports (including a blogger from the Wall Street Journal) a small number of protests got violent, with demonstrators hurling old computer parts at the Fidesz party headquarters. Other reports indicated that the anti-internet tax protests had become a magnet for general anti-government feeling.

One protester, who works for an international tech company, told The Register that she hadn’t seen any violence and that most people were very peaceful.

“The protest started at the Ministry of National Economy and after about 40 minutes walked to Heroes Square (hősök tere). As a symbol of independence and importance of the media, we were holding our cellphones in the air, emphasising that we will remain connected, no matter what law they to put in place," she explained.

Although protesters had been asked by organisers to bring only the national flag and the EU flag, many carried signs reading "Nem hagyjuk" (We won't let them) while chanting "Orbán takarodj" (Orbán, go away) and "Mondjon le" (He should resign).

Chief protest organiser Balazs Gulyas said that those opposing the internet tax were varied and he urged protesters to make the internet tax their common purpose. The idea of bringing broken computer equipment was to symbolise the "barrier of this stupid tax". ®