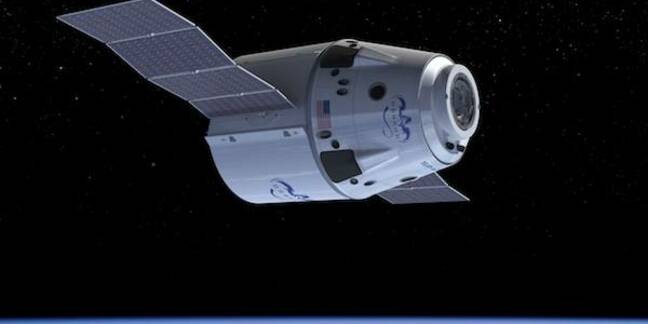 Vid The "Dragon" private space podule - which delivered cargo to the International Space Station - has returned to Earth five weeks after its mission began.

SpaceX's Dragon capsule was expected to splash down in the Pacific Ocean, around 265 miles west of the Baja peninsula, within the next hour.

ISS 'naut Reid Wiseman tweeted photos of Dragon as it was released from the space station's robotic arm at 9:57am EDT today.

The @SpaceX #Dragon sails over a cloudy #Sidney as it departs the #ISS pic.twitter.com/ypaMndb5cI

Next year, it's all about bouncy castles. ®

And we now have splashdown with SpaceX's Dragon truck returning with 3,276 pounds of NASA cargo and science samples from the ISS.

“The delivery of the ISS RapidScatterometer advances our understanding of Earth science, and the 3-D printer will enable a critical technology demonstration. Investigations in the returned cargo could aid in the development of more efficient solar cells and semiconductor-based electronics, the development of plants better suited for space, and improvements in sustainable agriculture.”