Next driver to battle fake chips with 'non-invasive' methods 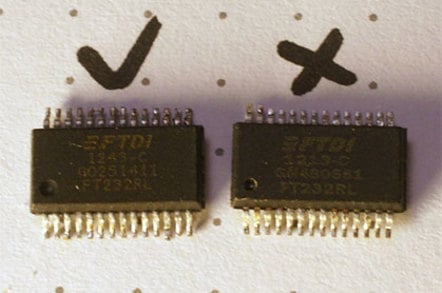 Chipmaker FTDI has pulled a driver from Windows Update that could brick devices containing knockoff versions of its USB-to-serial bridge chips, but says it won't back down on its aggressive anti-counterfeiting stance.

Earlier this week, hackers from various hardware forums began noticing that FTDI's latest driver would set a USB device's USB product ID to 0 if it contained a fake version of one of FTDI's chips. Once zeroed, neither Windows, OS X, nor Linux would recognize the device anymore, rendering it useless.

Naturally, owners of devices containing the counterfeit chips were less than pleased.

Responding to the growing furor, FTDI now says it has yanked the offending driver from Windows Update so that Windows users will no longer receive it automatically. But it says it has no intention of giving up the fight against (presumably) Chinese chip knockoff artists.

"As you are probably aware, the semiconductor industry is increasingly blighted by the issue of counterfeit chips and all semiconductor vendors are taking measures to protect their IP and the investment they make in developing innovative new technology," FTDI CEO Fred Dart said in a blog post on Friday. "FTDI will continue to follow an active approach to deterring the counterfeiting of our devices, in order to ensure that our customers receive genuine FTDI product."

To be fair, the chips FTDI is worried about aren't just off-brand work-alikes. According to an analysis by Russian blog Zeptobars, recent fakes are not only pin-compatible, but they also actually have the FTDI logo and part numbers stamped on them.

Dart said FTDI is working on a new version of its driver that will still reject non-genuine chips but will "do so in a non-invasive way that means that there is no risk of end user's hardware being directly affected."

Presumably this means devices with counterfeit FTDI chips won't work with Windows with the forthcoming drivers installed, but will still work with other operating systems – until FTDI releases new drivers for them, that is.

Anticipating such a move, Linux kernel contributor Russ Dill – a Texas Instruments employee – submitted a patch on Thursday that purported to have Linux perform "the FTDI genuine product verification steps as contained within the new 2.12.00 official release." He did so without so much as a wink, but the kernel community assumed he had tongue planted firmly in cheek, having previously butted heads with FTDI over its intellectual property stance.

"Funny patch, you should have saved it for April 1, otherwise people might have actually taken this seriously," Linux kernel developer Greg Kroah-Hartman wrote in response. "Patches as performance art, now I've seen everything..."

The Reg asked Microsoft whether it had any official position on hardware vendors using drivers to enforce intellectual property concerns, but Redmond declined to comment on policy.

"On Wednesday FTDI removed two driver versions from Windows Update," a Microsoft spokesperson told El Reg. "Our engineering team is engaging with FTDI to prevent these problems with their future driver updates via Windows Update." ®