Possibly another Perhapsatron in the making 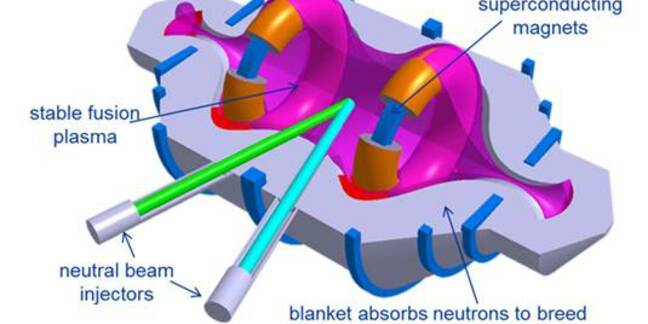 Pic Lockheed Martin has caused quite a stir with its announcement that it will ship fusion reactors the size of a truck within the next decade. 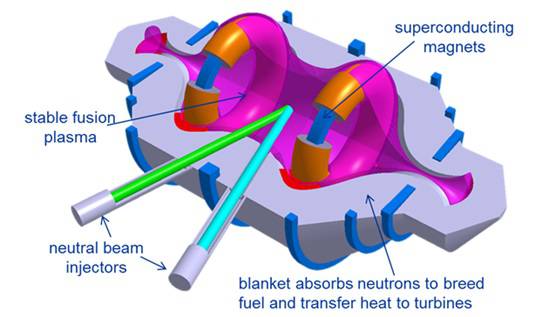 "Our compact fusion concept combines several alternative magnetic confinement approaches, taking the best parts of each, and offers a 90 percent size reduction over previous concepts," said Tom McGuire, compact fusion lead for the company's Skunk Works' Revolutionary Technology Programs. "The smaller size will allow us to design, build and test the CFR [compact fusion reactor] in less than a year."

The team reckons it can have a reactor prototype up and running in five years and in full production in ten. In a promotional video, McGuire claimed such a fusion system could give aircraft unlimited range and endurance – and the tech could be exported around the world without fears over nuclear proliferation enabled by fission reactors.

Lockheed gave Aviation Week a sneak peek at the technology, and McGuire certainly talks a mean game. Conventional fusion reactors are massive systems of machinery that contain superheated plasma held in a torus using magnetism, but the Lockheed design eschews that approach in favor of a reaction chamber that can hold the plasma in a new configuration that is much smaller.

The prototype is expected to only run for about ten seconds, but should generate much more power than what's put into running the thing. The goal is a 100MW reactor that's 23 by 43 feet (7 by 13 metres). The team is seeking outside investors to make it happen in the next ten years.

According to Aviation Week, the reactor apparently works thus:

Fusion fuel, made up of hydrogen isotopes deuterium and tritium, starts as a gas injected into an evacuated containment vessel. Energy is added, usually by radio-frequency heating, and the gas breaks into ions and electrons, forming plasma.

The superhot plasma is controlled by strong magnetic fields that prevent it from touching the sides of the vessel and, if the confinement is sufficiently constrained, the ions overcome their mutual repulsion, collide and fuse. The process creates helium-4, freeing neutrons that carry the released energy kinetically through the confining magnetic fields. These neutrons heat the reactor wall which, through conventional heat exchangers, can then be used to drive turbine generators.

All this is expected to be contained in a vessel the size of a business-jet engine.

Sounds great, right? Compact fusion reactors of this type would solve the world's energy needs at a stroke, slash carbon emissions, and ensure reliable, clean power anywhere in the world with some easy-to-obtain fuel: hydrogen. But experts are skeptical, not just about the technology but about the manner in which it is being promoted.

"I think it's very overplayed; they are being very cagey about divulging details," Professor Edward Morse from UC Berkeley's School of Nuclear Engineering in California told The Register. "An isolated group working in skunkworks is great at developing stealth aircraft, but it doesn't fit for this kind of research."

Prof Morse said that, judging from what limited information is out there, the reactor looks very like the small devices he makes for plasma physics experiments. While the new reactor design may emit neutrons, it may not generate the kinds of temperatures Lockheed is claiming could be possible.

These kinds of claims have been made before he pointed out. Back in the 1950s the US spent a lot of time and money at Los Alamos National Laboratory building the Perhapsatron to test out the Z-pinch theory of fusion generation, which eventually proved fruitless.

"The search for fusion has been long and painful and a lot of people embarrassed about it," Prof Morse said.

The professor also pointed out a curious part of the Lockheed announcement: the frequent mention of the search for outside investors. If the technology is such a game changer, why isn't moneybags Lockheed prepared to put its own money behind it?

"Lockheed Martin had revenues of $45bn last year, and profits of $2.9bn, so why are they seeking external funding, he asked. "That's like Barack Obama asking me for a loan."

A spokesman for General Atomics, a defense contractor that has focused on fusion and fission research for decades, said Lockheed's idea was raising eyebrows because this was the first the contractor had heard of it – and GA has been working with the US Department of Energy for years on fusion research.

General Atomics' fusion experts were unreachable as they are in Russia at the moment attending the 25th Fusion Energy Conference (FEC 2014) in St Petersburg, which would have been a logical place for Lockheed to present their idea.

It's very rare in the scientific field for a revolutionary leap forward of the nature Lockheed is claiming. It's not impossible, but the scientific community will need to see a lot more evidence before the compact fusion reactor is taken seriously. ®