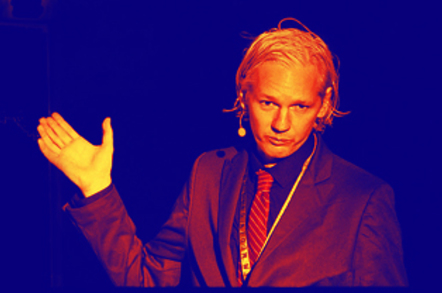 +Comment Silicon Valley’s biggest companies are an essential part of both the US state’s data-processing operation and a barely controllable element in American foreign policy, says WikiLeaks fugitive Julian Assange in his latest interview.

Talking to Pando Daily (from the Ecuadorian embassy in London), Assange dubs Google, Facebook and Apple "surveillance barons", which is not a new observation. He also highlights the US state’s reliance on the internet giant to increase American "soft power" abroad:

Google perceives that its overlapping networks should include networks of traditional US soft power, hard power, and networks in other countries where it is either collaborating with the establishments of those countries or — if it feels it doesn’t have an in with the elite of the other countries, it brings in the people that might one day replace it.

Assange also criticises Google’s network of “digital rights” groups - for being tame and domesticated, which means Google rarely comes under scrutiny. Google funds over 150 academic departments, think tanks and "citizens groups", offering them advertising, analytics help and fund-raising tools – and often hard cash. The support for these organisations helps shape the policy agenda to one that doesn’t disrupt Google’s business.

“The problem is that a lot of groups that would normally criticize Google, the nonprofits that are involved in the tech sector, are funded directly or indirectly by Google. Or by USAID. Or by Freedom House. Google and its extended network have significant patronage in the very groups that would normally be criticizing it,” says Assange. “It’s the nature of organizations. They don’t like to bite the hand that feeds them.”

Assange singles out the Electronic Frontier Foundation (EFF), which received more than half of its annual income from just one of a series of controversial "cy pres" class action payouts*. The out-of-court payments over privacy breaches saw university departments and groups enriched by Google and Facebook, while the individuals who brought the class action didn’t receive a penny.

“The EFF is a great group, and they’ve done good things for us, but nonetheless it is significantly funded by Google, or people who work at Google,” says Assange.

Although he’s now known as a notorious conspiracy theorist, Assange has found a conspiracy hidden in plain view.

But a better indicator of Google's influence is not when money changes hand, but when it doesn't. Take for example, the implications of the CJEU’s Gonzalez ruling, which upheld that Google wasn’t exempt from European data protection law, and which confirmed that individuals have the right to ask for links to old and irrelevant information to be removed from Google.

It’s popular with individuals who have done nothing criminal, and who can’t afford the lawyers needed to take out a superinjunction, like Andrew Marr. Google structured itself to avoid having to comply with European privacy law, so it could argue that it wasn’t actually doing any data processing in Europe. But this argument was rejected in the Gonzalez ruling.

In July, The Media Society, supported by ITN, held a discussion of the ruling. The event was called "Rewriting History" – no bias there – and featured a representative from Google, along with a barrister, an academic and ITN executive who were all hostile to the decision, on numerous occasions citing misleading evidence. The other panellist was the UK Information Commissioner, who is legally obliged to be even handed between the data processor (Google) and the individual. So four and a half panellists represented Google, the data processing giant, and half a panellist represented the individual – some of the time.

When I rang Privacy International if they would fight to defend the individual’s privacy – they told me they were “too busy”, and would sit this one out. As far as I know Google doesn’t fund either the Media Society, ITN or PI, but the individual has effectively been left without a voice. ®

* When, earlier this year, the EFF produced a "score card" of how well Silicon Valley giants protect individual privacy called Who's Watching Your Back? – the EFF gave Google and Facebook top marks. In effect, the giant data-processing corporations are paying the watchdogs who are supposed to watch them, and have been doing so since 2011. A better title would have been Who's Buttering Our Bread?

Assange's WikiLeaks: Give generously this Xmas – for statue of our dear leader

Steve Jobs gets posthumous Grammy AND a bronze statue

Who knew the iSaint was part of the Staines massive?

Apple biz tyrant to be IMMORTALISED in towering form ... if $50,000 raised