This sky ain't big enough for the both of us 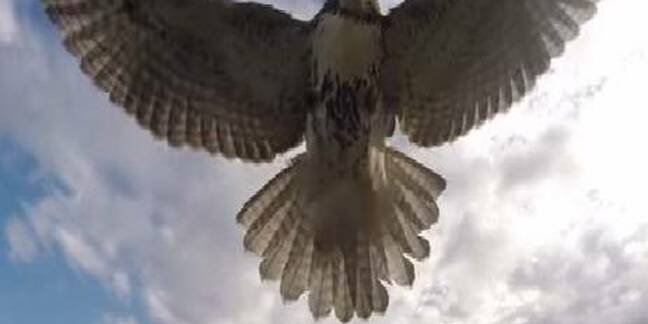 Vid A man in the Boston area of the United States has captured remarkable footage of a hawk strike – at the expense of his quadcopter drone.

Christopher Schmidt said he was flying his hobby craft in Cambridge earlier this week when a hawk began to circle. Schmidt, who equipped the quadcopter with a GoPro camera, said he powered down the craft's propellers in order to avoid injuring the bird when it became clear that nature and machine were going to clash.

The hawk then struck, felling the copter in a single strike. Not, however, before the craft's camera caught some dramatic, up-close and personal footage of the bird of prey descending and swooping, talons-first at the mid-air droid.

The video has since become a hit on YouTube, and Schmidt said he will donate half of any ad revenues he receives to the Massachusetts Audubon Society. Both bird and craft were unharmed.

In summary, you can add hawks to the list of things to steer your quadcopter clear of.

The small, lightweight robo-whirligigs-of-the-sky have become increasingly popular with hobbyists, and when equipped with cameras they can capture dramatic views of the landscape. Drones, flying below the FAA-mandated 400 feet altitude, have shot video of Apple's massive new headquarters and scoped out Richard Branson's private island. ®