Triple patch match as Oracle and Adobe pile on the pain 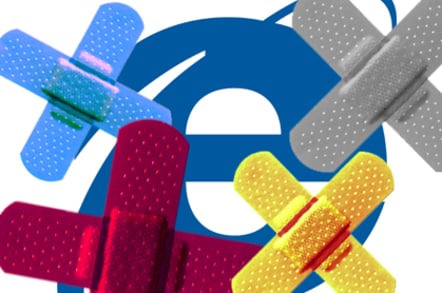 October is stacking up to be a bumper Patch Tuesday update with nine bulletins lined up for delivery — three rated critical.

Cloud security firm Qualys estimates two of the lesser "important" bulletins are just as bad however, as they would also allow malicious code injection onto vulnerable systems.

Top of the critical list is an update for Internet Explorer that affects all currently supported versions 6 to 11, on all operating system including Windows RT. Vulnerabilities discovered in most versions of Windows Server, Windows 7 and 8, and the .NET framework are covered in the other pair of critical bulletins.

Qualys argues that two of the five "important" updates being primed for release cover Remote Code Execution (RCE)-type bugs. The vulnerabilities are of a type that allow hackers to take control of machines and execute arbitrary code, usually a Remote Access Trojan (RAT) or similar.

According to this assessment, an update for Microsoft Office 2007 and 2010, as well as another flaw in Windows, need to be prioritised next week.

Karl Sigler, threat intelligence manager at Trustwave, pointed out that both server-based systems as well as desktops will need updating.

Updating IE installs ought to be the main priority, especially this month because more than 20 vulnerability are due to be fixed in Redmond's Swiss cheese browser software.

Yet again, the IE bulletin will be the highest priority to patch," Sigler advises. "This marks the ninth patch Tuesday in a row to include patches for IE. Like the previous IE bulletins, this will have more than 25 CVEs and some of these are expected to be exploited in the wild."

October's Patch Tuesday promises to be especially busy because a Flash patch from Adobe, as well as Oracle's quarterly update are all due to land on 14 October. Oracle quarterly updates are "usually massive and address many software components of a typical enterprise", Wolfgang Kandek, CTO, Qualys, writes in a blog post assessing these various updates.

All three software firms are withholding details of the flaws to be patched pending delivery of the software updates — standard practice to safeguard against giving hackers clues about how to attack systems in the meantime. ®