Chatting to Al Qaeda? Try not to do that – Ex spy chief defends post-Snowden NSA

Everyone spies but 'someone has to lead' – Keith Alexander 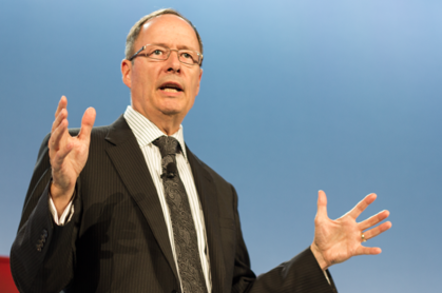 You have nothing to fear from the NSA: that is unless you're from outside the United States, or you arouse the agency's suspicion by chatting to Al Qaeda. "Try not to do that," was the advice given.

The warnings come from former NSA chief General Keith Alexander, who told delegates at a security conference that the National Security Agency's activities, as described by ex-NSA sysadmin and secret-doc-leaker Edward Snowden, are just the agency doing its job.

In a speech delivered to the MIRCon 2014 conference in Washington, Alexander made no apology for the phone call metadata siphoned by the business record FISA programme run by the NSA, including data collected on Five Eyes and European allies. Such collection is part and parcel of spycraft, and in line with the agency's stated mission, he said.

"Our data's in there (NSA databases), my data's in there. If I talk to an Al Qaeda operative, the chances of my data being looked at is really good, so I try not to do that. If you don't want to you shouldn't either," he told MIRcon delegates.

"It doesn't mean that we didn't collect on key leaders around the world," he said, before referencing a hypothetical question he once asked of allied countries that indicated each spied on one another, regardless of diplomatic position.

"Nations act in nations' best interest ... we at times want to make sure a war doesn't break out [and] it is important that our political, military leaders know what is going on."

He added pointedly: "Somebody has to be in charge".

The NSA pulled about 180 numbers a year from FISA records, which Alexander said was critical to "connecting the dots" and was an act that had been "100 per cent" audited since the Snowden leaks, without fault.

To shore up his argument, he recapped the US's scuppering of a 2009 terrorist attack on the New York subway and the arrest of lead suspect Najibullah Zazi, who appeared through his phone records to have coordinated the bombing. The FBI swooped on Zazi as he transited the country based on FISA intel, Alexander said.

"If the FBI was to do this it would have taken a few days [each] to obtain a unique warrant," which was beyond the agency's capability, he said.

The former spy chief did not answer questions by foreign journalists on how other countries should react to the Snowden revelations.

Asked by El Reg through a vetted question system what he most regretted about his time at the NSA, Alexander said it was the media's representation of the NSA's activities as conducted by "rotten people". He said NSA bods were dedicated individuals who shirked higher pay packets for careers spent "protecting the nation".

"That was to me the most disheartening part," he said. "I saw these people willing to sacrifice their lives for our country [the US] ."

The former NSA boss said he had had great partnerships with intelligence agencies across the world, including the European Union – even after the Snowden leaks, which he said were written off as being "political".

Alexander urged the security faithful to unite, even calling for banks to operate out of a united facility to harden the nations' financial capabilities. ®