Steve Jobs makes world a better place FROM BEYOND THE GRAVE

He provided the CANVAS for artists' masterpieces – Cook 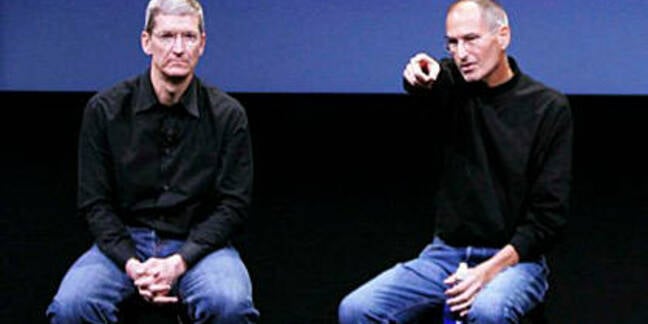 Apple chief Tim Cook sent an email to staffers on Friday, in which he reminded them all of the greatness of Steve Jobs – who has been dead three years today.

It comes after Google's executive chairman Eric Schmidt took a swipe at the Apple boss on Thursday for supposedly getting it wrong about the ad and search giant's security and encryption tactics.

"Our systems are far more secure and encrypted than anyone else, including Apple. They're catching up, which is great," Schmidt told CNN Money, before cattily remarking: "Someone didn't brief him [Cook] correctly on Google's policies. It's unfortunate for him."

In the same interview, Schmidt cooed over Jobs by declaring that the Apple co-founder, who died in 2011, was his hero.

Cook, of course, joined the love-in on Friday when he told Apple employees, in an email published by 9to5mac:

Sunday will mark the third anniversary of Steve’s passing. I’m sure that many of you will be thinking of him on that day, as I know I will.

I hope you’ll take a moment to appreciate the many ways Steve made our world better. Children learn in new ways thanks to the products he dreamed up. The most creative people on earth use them to compose symphonies and pop songs, and write everything from novels to poetry to text messages. Steve’s life’s work produced the canvas on which artists now create masterpieces.

Steve’s vision extended far beyond the years he was alive, and the values on which he built Apple will always be with us. Many of the ideas and projects we’re working on today got started after he died, but his influence on them – and on all of us – is unmistakeable.

Enjoy your weekend, and thanks for helping carry Steve’s legacy into the future.

But come on, Cook, would Jobs really have allowed the camera to rudely protrude like that on the iPhone 6 models? Vulture Weekend doubts it. That U2 marketing ploy, on the other hand, was straight out of the Steve Jobs' playbook. What a canvas, indeed. ®