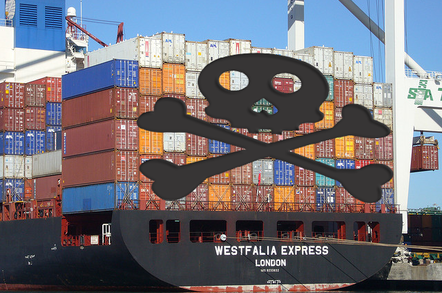 Security bod Larry Pesce has developed a chopping board-sized hacker package as an inexpensive weapon for hacking wireless networks through the post.

The device is designed for so-called "war shipping" attacks described (vid) last year in which hacking hardware is posted to a target organisation with the aim of attacking wireless networks from a mail room or absent staff member's desk.

Pesce's board is low-cost, fits in a standard USPS postal box, and provides sniffing and attack capabilities with location tracking.

"We wanted to know when it arrived at an appropriate location or very close, when specific networks were in range so we could launch attacks, to make sure we were attacking the right folks and what could be done in transit," Pesce told Derbycon security delegates.

"Maybe [an employee] posts on Twitter 'hey I just got fired' and you can ship to them."

The Raspberry Pi hack board overcame a variety of capability and power issues granting it up to 300 hours of power and the ability to report location without GPS, which would drain batteries and be ineffective most of the time.

The board can be used to target specific organisations, shipping companies, or any entity along the shipping route, provided the truck either stopped or moved slowly on last mile trips.

Pesce got around the location issue by calling Apple's Wi-Fi location mapping through an undocumented API used in the iSniff project.

He published the software to GitHub for users to build the system, which was still being continually upgraded.

"It reads in Kismet XML output, reads all BSSIDs, and queries Apple's undocumented APIs to populate a Google Map," he said.

There is little defence against the attack without spending huge amounts of money.

The kit was built on a Raspberry Pi B+ with an AWUS051NH wireless card, a repurposed cheap battery charger, kismet and custom software. ®