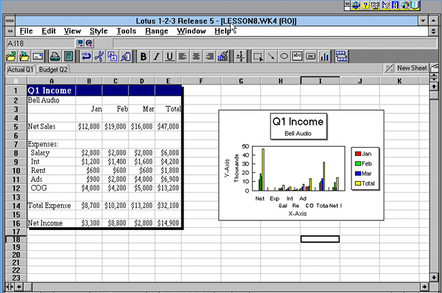 On Tuesday, with no fanfare, IBM closed the last chapter in the life of one of the most iconic early computer programs, Lotus 1-2-3, when it withdrew support for the final build of the software.

IBM Lotus 123 Millennium Edition, IBM Lotus SmartSuite 9.x, and Organizer have now officially all passed their end of life support date and, according to IBM's website, "No service extensions will be offered" – not that anyone is seriously using the spreadsheet any more.

It's a sadly muted end for what was, at one time, the world's premier spreadsheet. Lotus 1-2-3 was one of the first applications that made IBM's original PC a serious business tool, but it fell by the wayside due to poor coding decisions, failure to adapt, and the crushing tactics of Microsoft.

Back in the late 1970s and 80s, the software that really sold the business community on personal computing was spreadsheets. Prior to the personal computer, spreadsheets were the purview of mainframe systems, but with the PC revolution, every manager could have this most handy of business tools right there on their desk, to play around with variables to their heart's content.

The first of the new breed of desktop spreadsheets was VisiCalc, designed for the Apple II in 1979. Before long it was one of the most popular pieces of software for Jobs' and Wozniak's machine. When IBM launched its PC in 1981, Big Blue made sure that VisiCalc was also available for its system.

Mitch Kapor was head of development at VisiCorp, which marketed VisiCalc, and in the summer of 1981 he met up with the talented computer programmer Jonathan Sachs, who had been porting VisiCalc to DEC and DG minicomputers. Together they decided to form Lotus Development Corporation the following year.

In 1983, Lotus 1-2-3 was launched and quickly usurped VisiCalc for PC users. The name derived from the fact that the software contained a spreadsheet, graphics package, and very primitive database manager – and it was a smashing success, bringing in huge wodges of cash for its creators.

Lotus began the now-standard process of growth: buying up competitors and shutting them down, suing competitors it couldn't buy, and basically getting fat on the returns of its flagship product. It did produce other software, but none rivaled 1-2-3 in popularity.

But the company also made some major mistakes. It was slow to develop a 32-bit version of the software, wasted time and money writing for IBM's ill-fated OS/2 operating system, spent more developing the Notes email system, and spent over a year developing a new edition, leading to an Osborne Effect with customers.

At the same time, Bill Gates had set his beady eyes on Lotus and began developing homegrown versions of the firm's products to sell from Redmond. This wasn't too successful at first (anyone remember Multiplan?) but slowly Excel and Microsoft's Office suite began to bite into Lotus' market share.

In 1995, as Lotus began to fall from grace, IBM staged a takeover that cost it $3.5bn. It carried on developing Lotus' groupware product portfolio and had some success at first (although many Notes users still spit at the memory of the software).

But 1-2-3 was in terminal decline and IBM began quietly removing Lotus branding and shutting down sections of the groupware portfolio as they fell into similar disrepair. IBM Lotus 123 Millennium Edition was the final build and IBM discontinued shipping it two years ago.

While the loss of 1-2-3 is an occasion for nostalgia, the money it created is still doing good today. Kapor used part of his lucre to set up the Electronic Frontier Foundation to fight for online rights. He was also the first chair of the Mozilla Foundation, which did much to improve browsers by forcing Microsoft to compete. ®