OMG! With nothing but machine tools, steel and parts you can make a GUN!! 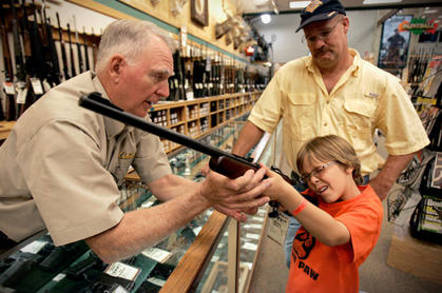 Analysis Not so amazingly, it turns out that with nothing more than a lot of manufactured parts and some specialised machinery, you can make a working rifle. This "news" comes to us because a man famous for pretending to make working guns from 3D-printed plastic is selling such machinery - which does rather prove that his 3D printed plastic guns were indeed rubbish, and that you should take everything he says with a large pinch of salt.

The person in question, of course, is Cody Wilson, who caused a huge media pant-wetting with the "Liberator" 3D printed plastic "gun" - which was barely any more effective than holding up a cartridge in a pair of pliers and banging the cap with a centrepunch.

Wilson's latest offering is the "Ghost Gunner", a small CNC (computer-controlled) milling machine. In the USA, gun control laws - naturally enough - attempt to regulate and control trade in actual gun parts while still permitting unrestricted trade in pieces of metal. The way this has panned out is that you can take a billet of steel and go quite a long way towards turning it into - let us say - a stripped AR-15 lower receiver, and it will remain just a piece of metal which you can send via post, Fedex etc to anyone you like. The AR-15 is a widely favoured rifle design: it was specifically created by the famous Eugene Stoner to be highly adaptable and able to accept many different kinds of barrel, ammo etc, and as a result it is very popular among custom gunsmiths and gun-building enthusiasts. It is also carried in various forms by the US military and various other armed forces.

If you take such a possibly-not-a-gun-part, possibly-a-gun-part pre-manufactured piece - status depending how much of the work has been done, and on the judgement of the feds - and pop it into a Ghost Gunner connected to a PC with the right software, the machine can mill out the remaining bits of metal that are not required (it can't do the job starting from just a block of steel, and it isn't clear that it works on any available product acknowledged by the feds as definitely not being a gun part - buyer beware).

Then all you need is a whole lot of other specialist parts - springs, trigger, safety/selector, hammer, various pins etc - and you can, if you know what you're doing, assemble a complete lower receiver. Then all you need is an upper receiver, a barrel, bolt, buttstock and various other specialist items and - again, assuming you are a competent armourer - you can build a complete, functioning AR-15 assault or battle rifle*. Most of these parts can be purchased relatively easily online in America: the feds focus mainly on lower receivers because they are the only part of an AR-15 that is potentially illegal to make or have (if configured for fully-automatic fire).

And there you have it - by spending thousands of dollars, learning some complicated skills and doing some machining, you have obtained a functioning semi- or even, potentially, fully-automatic** weapon and you didn't have to comply with any pesky gun controls. Wow! Big stuff, eh?

Not really. It would be so much easier and cheaper to go to one of the great majority of US states where there are no local "assault-weapons" laws and buy a proper, working, factory made AR-15 of your choice from a private owner or dealer not operating under a federal firearms licence. Such a sale is perfectly routine (some studies estimate that 40 per cent of US gun sales are of this type), requires no background check or records, and of course owning such a weapon is perfectly legal for an American. Provided you aren't a convicted felon or otherwise registered as unsuitable to buy guns by the FBI - like nearly all Americans - it's even easier. You can just go and buy your AR-15 from a normal federally-licenced dealer such a Wal-Mart, in most states without any other restriction than the FBI database check.

There are a couple of minor issues. Your Ghost Gunner AR-15 could potentially be capable of fully automatic fire and so illegal under US law, but that isn't the big deal everyone thinks it is. There isn't any great difference in deadliness between a legal semi-auto AR-15 and an illegal post-1986 full-auto one, and anyway it's fairly simple to alter a legal one to full auto - you don't need to cock about milling a whole new lower receiver to do it.

Yes, a Ghost Gunner AR-15 receiver needn't have a manufacturer's serial number on it, but there's no comprehensive firearms register in the USA so this means basically nothing: anyway it's miles easier to remove the number from a normal receiver than mill a whole new one.

So why all the hype? Why do we have dunderheads writing of "a semi-automatic weapon with no serial number, obtained with no background check, no waiting period or other regulatory hurdles. Some gun control advocates call it a 'ghost gun'."

But there isn't any actual requirement for background checks or waiting periods or any other hurdle to stop you buying a gun in the USA! Gun control people in America (and indeed gun advocates, a lot of the time) usually prefer to talk of some other USA where these things are required, but it doesn't exist and there seems to be no realistic prospect that it ever will.

Next page: American? Been shot dead? Was it an accident? NO. Was it someone else? UNLIKELY. Was it an assault weapon? VERY UNLIKELY
Page:
Tips and corrections
142 Comments

British military spends more on computers than weapons and ammo

Shows where wars of the 21st century will really be fought...