Super Cali so litigious, Uber is the focus. Even German judges say it's something quite atrocious

Lies! It's all lies, says upstart 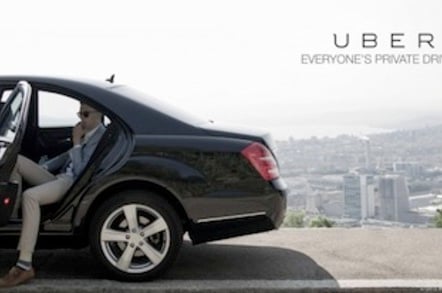 Taxi biz Uber perhaps can't wait to put this week in its rearview mirror – after it was dealt legal setbacks in four major cities: two in Germany, and two in California.

In August, officials in Berlin and Hamburg decided that Uber should not operate in the two cities due to safety concerns and worries about unfair competition with licensed taxi drivers.

Uber was allowed to run its cab service while it appealed to the courts, but on Friday lost both battles – and is now blocked from operating in the cities. It's still mulling whether to appeal again to a higher authority.

"[Drivers aren't checked] to see whether they can take the special responsibility when transporting customers."

Making things worse for Uber, the company is also facing legal challenges to its service in its hometown of San Francisco. The San Francisco Chronicle reports that the district attorneys of both SF and Los Angeles have sent letters to Uber, Lyft and Sidecar threatening legal action if the trio don't update their policies on driver background checks and curb their paid carpool platforms.

"Ridesharing is unequivocally supported by the California legislature, the CPUC [California Public Utilities Commission], the Governor, local jurisdictions across the state, and millions of Californians," an Uber spokesperson told El Reg on Friday.

"The DAs have made numerous inaccurate assertions that we will correct and discuss with them."

The Register reached out the DAs for additional comment, but a spokesperson for the LA district attorney referred requests to the San Francisco office, which has yet to respond.

And if that wasn't enough trouble for Uber, a separate report from The Chronicle names an Uber driver as the defendant in a felony assault case.

The driver, who was working on the UberX service, was charged with hitting a passenger with a hammer during a dispute in San Francisco earlier this week. He has pleaded not guilty. ®