CURSE YOU, 'streaming' music services! I want a bloody CD 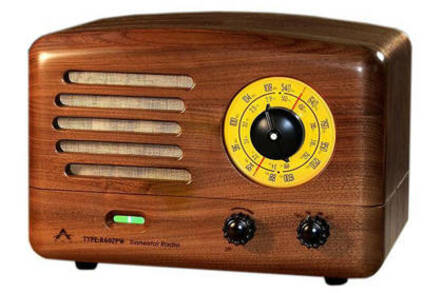 Something for the Weekend, Sir? Oh bloody hell, grandma, what have you done this time?

“I thought that was obvious. It’s your birthday. I bought you a CD.”

“I remembered you used to like music when you were a student. Have you gone off it?”

You no’ down wit’ da word, daddio. Grannio. CD is old. Is all streaming, now, innit?

“Well, I see you recently bought a turntable to play gramophone records, so what’s wrong with a CD?”

That’s… that’s different, old hag. Old is cool. But not if it isn’t very old, of course. Or a hag.

“I take it you don’t want this Aliens box-set on Blu-ray either.”

What the..? No-one plays videos on disc these days!

FUCK YOU, grandma. FUCK YOU.

When I suggested that iTunes users were acting somewhat ungraciously a couple of weeks ago when Apple gave them all a free U2 album, a number of colleagues shrugged their shoulders and said it was irrelevant since everyone is streaming these days. So shouting FUCK YOU at nice old grandma Apple when she turned up bearing gifts was pointless anyway.

But it made me feel very old. I have held back from taking the plunge into music streaming and now I’m told everyone is doing it apart from me. As I walk down the street, listening to specific musical tracks that I purchased, passersby are sniggering and muttering to each other:

“Look, I bet he’s listening to music he ripped from a CD!”

As I walk on, a shout greets me from behind my back:

“Hey, granddad, did you DOWNLOAD that? Ha ha ha!”

Striding through the office, I have to mind my feet as hipsters, shocked at my outdated mode of listening technology, spit on the carpet tiles in front of me. Arriving at my desk, I am accosted by the boss who, taking one look at my playlist, screams “You decrepit old fart!” and punches me in my face while his secretary pulls me back across the desk and the work experience boy stabs me in the gut with a plastic spoon.

It’s a tough world out there when you’re not streaming.

I have been avoiding streaming all this time for two reasons. First, I don’t see the appeal. As far as I can work out, all the streaming services offer 50 billion shit songs that I don’t want - which isn’t much of an incentive, to be honest. When I do find some artists I like, most of their back catalogue is missing. I can’t find any information about any of the songs and, with the exception of the front cover, there are no sleeve notes available.

Essentially, it’s like going into a bad record shop. A really bad one.

My second objection is that emerging artists on streaming services get paid bugger all while the big stars enjoy much more favourable deals. By subscribing to a streaming provider, I would be actively encouraging the industry to take advantage of the poor in order to make the rich wealthier. What if royalties from broadcast radio-play was divvied up like this? There would be a scandal.

When I exchange a CD with my wife, for example, we don’t ask each other to read and accept a terms and conditions document lengthier than War and Peace before insisting that a binding legal transaction has just taken effect. Nor do either of us have to configure settings and permissions and user groups and IDs and such arse.

Some years ago, my son received a £20 iTunes Gift Card on his birthday. He was so pleased and looking forward to downloading some music and rushed straight to his computer, eyes bright and gleaming.

An hour later, we were still crowded around his desk, trying to sort it all out. It turns out he couldn’t spend the iTunes Gift Card without an iTunes account, but when he tried to set one up, it told him he was too young at 12. Clearly impressed by my suggestion that he lie about his age – go on, it’ll be OK, it’s fine to lie about things, son, you’ll see – he pretended to be 13 but then the system started asking for credit card details. Duh, silly me, I never thought to order my son his own American Express Gold Card. Every other 13-year-old has one these days, obviously.

In the end, I did what any self-respecting parent and IT industry worker would do in front of his young family in such a situation: shout “Stupid fucking cunting bollocks” at the screen and storm off to find a £20 note to give my son instead.

It’s funny but when I was a kid, I could purchase a record with money or record tokens without any such fuss. No-one asked me to sign any legal documents, no-one asked my age or address, no-one insisted that I fill out page after page of stupid forms. This is ironic because several of my earliest purchases were Gary Glitter singles, which ought at least to have required some kind of police check.

But in the digital age, it seems, only over-13s are allowed to listen to music. For many of the streaming services, the entry age limit is higher. No wonder youngsters listen to TV-warbling X Factor crap all the time: it’s the only thing they’re legally allowed to hear.

Personally, I do download a lot of music, especially stuff I know that no-one else will like, but then I am well over 13 now. “Still fiddling with your downloads, grandpa?” Oh yes.

This week, however, I took the plunge and tried out several streaming services. And they were all pants.

My biggest problem was that the music stream kept cutting out as I walked about, took a bus or train, or simply walked past a coffee shop and 3G switched to Wi-Fi. While I was travelling on the London Underground, my streaming subscription bought me non-stop silence.

“No, you idiot,” my colleagues tell me. “You can’t stream your music while moving about!” Great, so this fab method of listening to music that everyone is using cannot be used unless I’m sitting perfectly still in the living room, like a bubble-cheeked 1940s child in front of a valve radio.

“No, no,” they tell me, “when you’re out and about, you download your music.” OK, but that’s not streaming, is it? That’s downloading. I already do downloading and I’m told this is hopelessly old-fashioned of me; that’s why I’m trying streaming. Now you’re telling me that what you call streaming is actually downloading. Which is what I already do.

Hilarious, isn’t it? The tears are literally downloading down my face. Literally. ®

Alistair Dabbs is a freelance technology tart, juggling IT journalism, editorial training and digital publishing. He feels that streaming services ought to be a good way of discovering new music but it isn’t. It is utterly random. The best way to hear new music remains digital radio. Learn from the Johnny Doom music selection process.

Rose-tinted spectacles ON. Nope, not doing anything

Using memcached? Get it behind the firewall and turn off UDP if you want to live