Metadata retention is all that's left 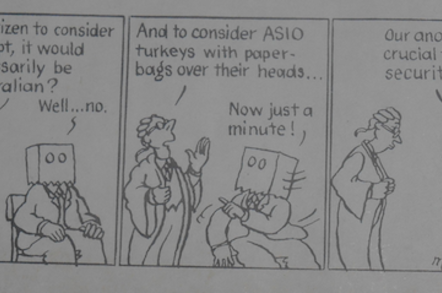 Australia's draconian national security legislation has passed the Senate, and with its passage through the House of Representatives next week a certainty, will become law.

As well as the “monitor an unlimited number of computers” provisions reported yesterday, the federal government has:

All minor-party attempts to moderate the impact of the laws were defeated, with the Labor opposition supporting the government in the Senate, to at best muted journalistic opposition.

The year is 1983, the city is Melbourne, and a spy agency has settled on one of the stupidest training exercises ever to become public knowledge.

Acting (unbelievably) on their own initiative, ASIS trainees staged a faux hostage rescue in what was then the Melbourne Sheraton hotel, and made such an utter shambles of it that their formerly-secret agency got put under intense scrutiny at the Hope Royal Commission.

After threatening the hotel's manager with weapons, the agents then hopped into cars, one of which got stopped by Victoria Police but the occupants declined to produce ID, and the whole thing became public.

Along the way, Melbourne newspaper The Age published details of the operation – including the agents' names.

That whole incident would be protectable under the kind of laws that passed the Senate last night. In spite of a bunch of jejune idiots waving both pistols and machine-guns around in a public place, the “special intelligence operation” coverage of the incident would have kept it out of newspapers, backed up by the threat of ten years in the slammer.

It appears, however, that Australia's press can't manage a memory with a 31-year span: even with an example to hand of why the laws are a bad idea, media has been unable to summon up the incident to mount a serious challenge to the attorney-general George Brandis' assertions that the laws are about leakers, not journalists.

Laws protecting spooks are just as likely to get deployed not to protect their successes, but to hide their mistakes – and with nary a murmur from Canberra's press gallery, the nat-sec Kool Aid has been served and swallowed. ®

'Outpaced' ASIO was infiltrated by Soviets

'Whole of the Internet' legislation close to passing

For you own good, really